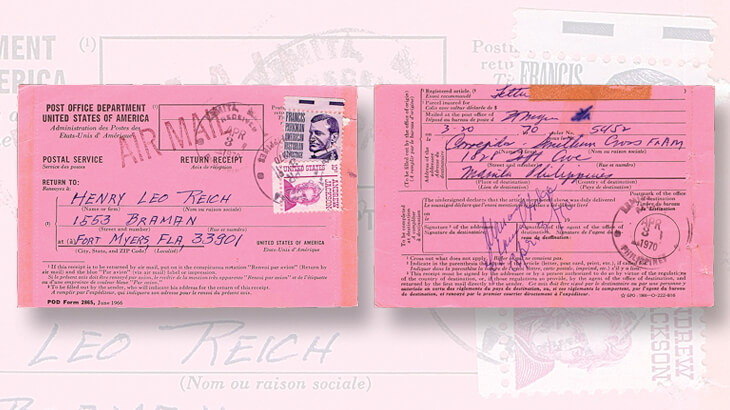 The information concerning international return receipts in my and Henry Beecher’s U.S. international Postal Rates, 1872-1996, and Updated United States International Rates, 1996-2011, is somewhat inaccurate. That is, there are significant errors in Chapter 19, “Registry Mail Service” — errors that are corrected in the errata page of my website.

This errata page has been updated in the soon-to-be-released book (at Stampshow 2016, Aug. 4-7 in Portland, Ore.), Insights into U.S. Postal History, 1855–2016. However, the above URL is adequate for the Chapter 19 corrections.

A significant change occurred as of PB 19758, July 13, 1954, which stated: “If the sender desires that his return receipt be sent back to him by air mail he must pay for this return, in addition to the return receipt fee, the air mail postage applicable to a single post card to the country of destination.” [Again, emphasis added]

This change occurred because of the June 1, 1954, introduction of the special international airmail rate for postal/postcards. (Note the use of “air mail” in this PB reference; the term spelled “airmail” wasn’t introduced into the Postal Bulletins until sometime in the mid-1950s.)

It is my experience that examples of such airmail returns of international return receipts (paid with postage) are very uncommonly seen.

The example in this column was made available to me courtesy of Roger Brody. This April 3, 1970, return receipt accompanied a registered item sent to the Philippines and was properly franked with 13¢ postage, paying the 13¢ international airmail postcard rate of the time.

Note that, correctly, U.S. postage was applied to a card being returned from the Philippines to Florida. The 13¢ postage included the Great American series 3¢ Francis Parkman (Scott 1281) and the 10¢ Andrew Jackson (1286) denominations.

In conclusion, I need to make a point. Although there are errors concerning return receipts in Chapter 19 of my international rates book, they are only for the surface return fees; the information in this chapter concerning airmail return of these receipts is correct.

Tony Wawrukiewicz and Henry Beecher are the co-authors of two useful books on U.S. domestic and international postage rates since 1872. The third edition of the domestic book is now available from the American Philatelic Society, while the international book may be ordered here online.