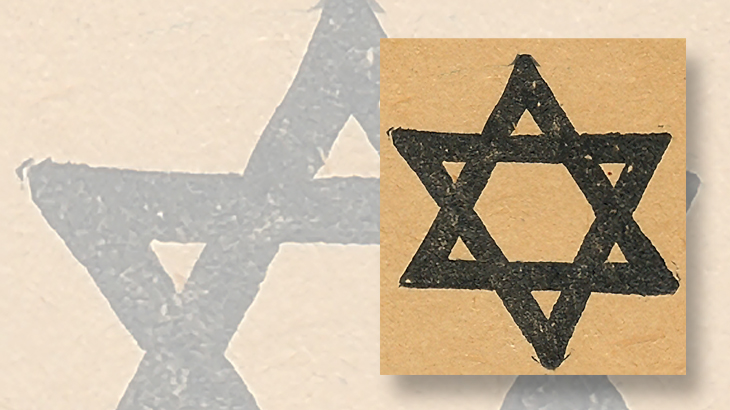 This Star of David marking appears on a 1935 return envelope from the Minor Division of the Dead Letter Office. Minor Division clerks opened dead letters and sorted them according to contents, either of little or no value, or valuable. 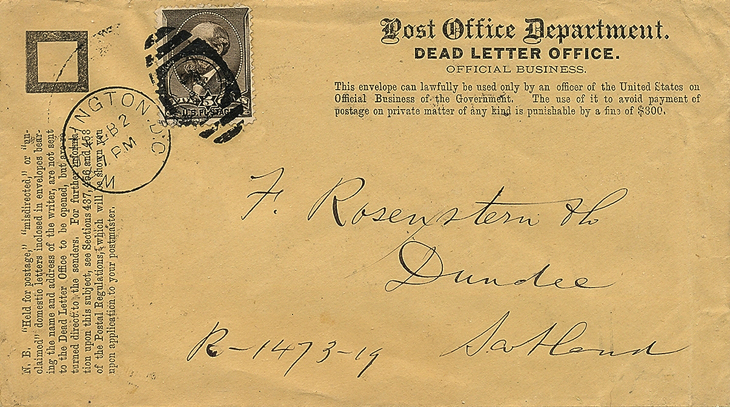 The Property Division of the Dead Letter Office used a square symbol, such as appears on this 1888 return envelope containing a dead letter of foreign origin. It was sent back to Scotland in this return envelope with 5¢ postage due for the return, for the 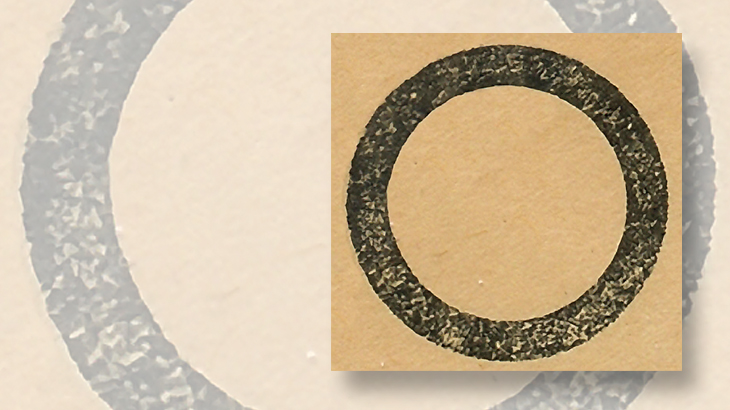 A symbol of a circle (this one from a 1904 Minor Division return envelope) indicated that the dead letter was opened and found to contain no enclosure of value. 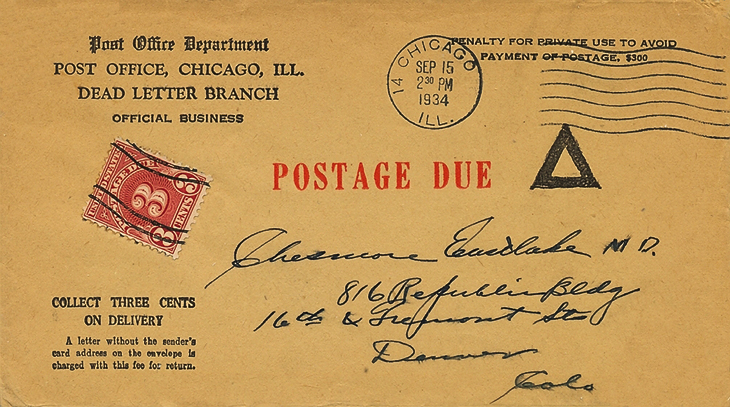 A 1934 Chicago Dead Letter Branch return envelope bears a triangle marking, indicating that the Chicago branch Returning Division sent back the dead letter. The 3¢ postage due stamp shows that the Denver, Colo., office collected the 3¢ return fee.
Previous
Next

I collect Dead Letter Office return envelopes, and many of them have various geometric figures stamped on them: circles, squares, triangles and Stars of David. I am frequently asked what these figures symbolize, so that will be the subject of this column.

The triangle geometric figure is the one that is most commonly seen. It was used to identify an item that was sent back to the original mailer by the Returning Division of the Dead Letter Office or Branch.

Before 1917, there was only one Dead Letter Office, in Washington, D.C., and domestic returned items from it were almost always returned free.

After 1917, there were anywhere from three to hundreds of Dead Letter Branches. From 1917 until 1985, returns from these offices or branches required payment of a fee.

A return envelope with triangle marking is shown in the first illustration, sent from the Chicago Dead Letter Branch in 1934.

The triangle symbol indicated that the Chicago Branch Returning Division returned the dead letter, while the 3¢ precanceled postage due stamp (Scott J72) indicates that the Denver, Colo., office collected the pre-1935 return fee of 3¢.

Use of the six-pointed Star of David symbol indicated that the Minor Division of the Dead Letter Office or Branch handled the return of a dead letter.

A report to the United States Senate regarding business methods of federal government agencies stated that some clerks in the Minor Division handled “minor letters – that is, letters which contain inclosures of sufficient value to sender to require record, though not directly convertible to money,” such as papers, photographs and postage stamps.

Other clerks in the Minor Division handled dead letters containing valuable items, such as “unsigned deeds, wills, soldiers’ discharges, insurance papers, etc.” The illustration here showing an example of a star was stamped on a 1935 Minor Division return envelope.

The Minor Division also used a circle to identify letters that had been opened and found to contain no enclosure of value.

Finally, the Property Division of the Dead Letter Office or Branch used a square to identify items of a bulky sort. This division handled letters not advertised and marked unclaimed and undeliverable parcels, except those that were registered mail.

For instance, last illustration shown here is of an 1888 example of a Property Division return envelope to Scotland. Note that the penalty envelope could not pay the postage for overseas service, and a 5¢ James A. Garfield stamp (Scott 205) paid the Universal Postal Union rate for a letter weighing up to 1 ounce.

Examples of this type of envelope with the square symbol are much less common than envelopes carrying the other three symbols.

In this case, the return was free to the sender, but the Post Office Department had to pay the return postage of 5¢ for the up-to-1-ounce UPU rate.

Tony Wawrukiewicz and Henry Beecher are the co-authors of two useful books on U.S. domestic and international postage rates since 1872. Both are available from the American Philatelic Society.