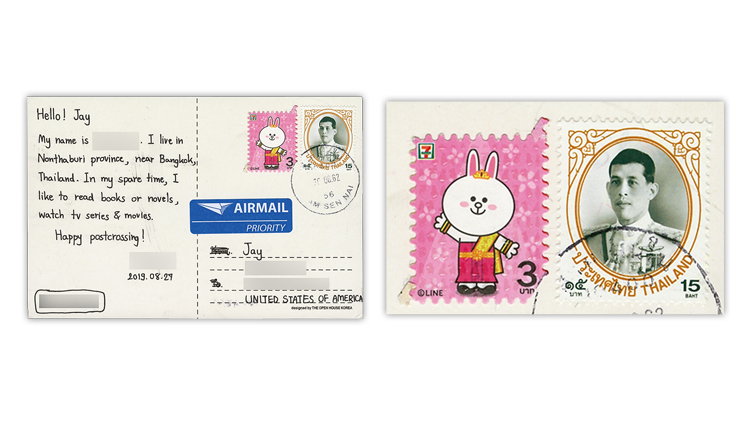 A Postcrossing user added a stamplike label from 7-Eleven next to the real Thailand postage stamp on this postcard. The real stamp, which depicts Maha Vajiralongkorn, paid the 15-baht postcard rate.

I was intrigued by a postcard I received in the mail in mid September sent by a fellow Postcrossing user in Thailand. (Postcrossing is an international project in which people from around the world send each other postcards.)

The postcard was franked with what appeared to be two postage stamps, but I couldn’t locate either one of them in my recent Scott catalog or the Scott New Issues Update published in the Linn’s monthly edition.

I eventually found that the 15-baht stamp was part of the Maha Vajiralongkorn (King Rama X) definitive series issued in 2018.

I paused when looking at the other stamp, denominated 3b and showing a cartoon figure. The 7-Eleven convenience store logo in the upper left of the design caught my eye. The stores in Thailand have carried some stamp issues exclusively before (see the footnote after Thailand Scott 2368). However, because this one lacked the country name, I wondered what it could be.

After doing some searching online, I discovered that it was a label used much like a discount coupon in the United States. The customers of 7-Eleven receive these labels with their receipts, and after saving a certain number of them can turn them in for discounts or products.

These stamplike labels even have raised clear ink applied in a pattern as a security feature.

The person who sent the postcard likely added the 7-Eleven label as a fun bonus to an already interesting philatelic item.