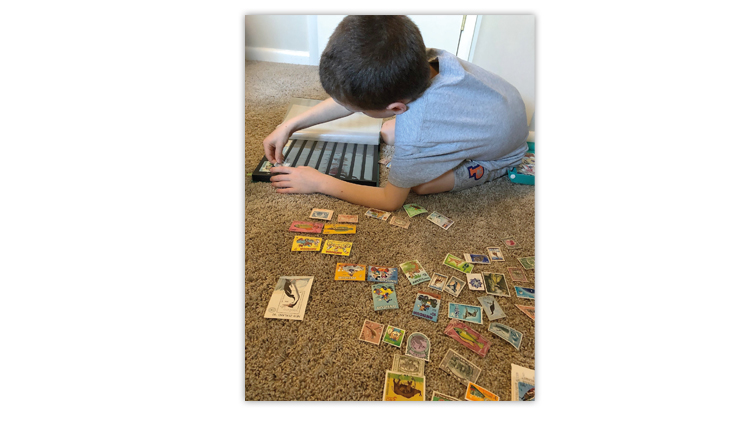 One of the stories in the March 15 edition of Linn’s struck a chord with me. Charles Epting writes about how author F. Scott Fitzgerald used stamps to bond with his daughter.

The stamp collection is on display at the Scott and Zelda Fitzgerald Museum in Montgomery, Ala.

I have two sons, ages 5 and 8, and they are both aware of stamps and stamp collecting, but so far I have never really pushed the hobby on either of them. We typically spend quite a bit of time building Lego sets, enjoying the outdoors and traveling when able.

Like many in the world, I largely worked from home last March and April, and my children saw me working on various stamp projects throughout the day when they would slightly interrupt or let me know it was time for lunch.

One day, the oldest started asking quite a few questions about stamps and what I was doing. The next day I put together a number of items to get him started on his own collection: a packet of worldwide used stamps, an old stock book, an older edition of the Scott Specialized Catalogue of United States Stamps and Covers, and a Mystic stamp sales catalog that I had received in the mail.

It clearly sparked something as he bookmarked several pages in the two catalogs and started his own collection. He even made a tag for the cover of the stock book, calling his collection “To the Stamps.”

To my surprise, some of the items he bookmarked were classic stamp issues and not pop culture issues. I also have a sneaking suspicion that his George Washington Halloween costume for last year came from seeing Washington on so many postage stamps and wanting to learn more about him.

We ended up getting lots of library books about Washington for him to read.

My son also found great interest in space stamps because of the SpaceX Crew Dragon mission that we watched live on May 30, 2020, for liftoff and docking at the International Space Station.

His interests may shift again at some point, but I am enjoying being able to share my hobby with him even if it is in a fairly small way.

What’s also interesting is I gave my youngest a copy of the USA Philatelic catalog that had the Bugs Bunny stamp issue on the cover, largely because he likes bunnies and not specifically Bugs Bunny. To my surprise, he keeps flipping through that catalog and asking questions about different stamps pictured in there. So maybe he will start collecting, too, when he gets a little older.

I am certain that other readers have interesting stories about sharing the stamp hobby with family members. Perhaps in a future column I can include some of those stories.