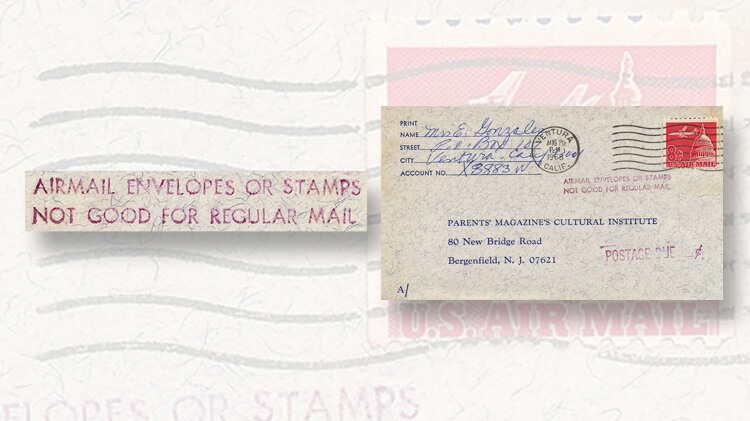 This August 1968 envelope was underfranked for the existing domestic airmail rate (10¢ for a letter up to 1 ounce), but neither could the 8¢ airmail stamp be used to pay the regular first-class letter rate of 6¢. As the handstamp states, “AIRMAIL ENVELOPE 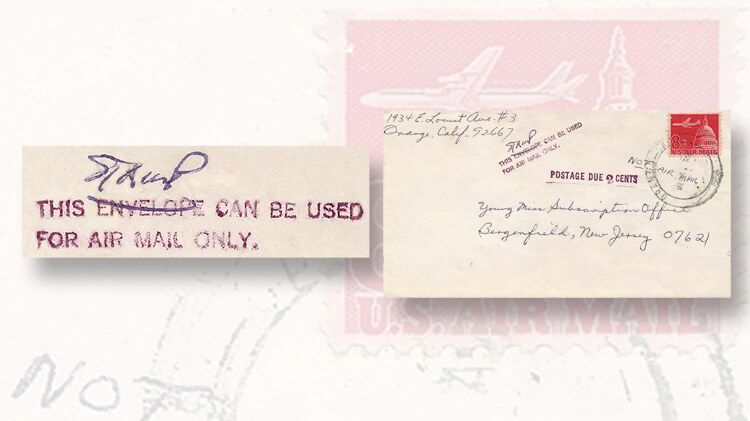 This 1968 letter franked with an 8¢ airmail stamp underpaid the airmail rate of 10¢ for 1 ounce or less, effective Jan. 7, 1968. This underpayment made the use of the 8¢ airmail stamp invalid, resulting in the various postal markings, including 2¢ postage
Previous
Next

There is often a question with airmail postage regarding the circumstances under which its use was invalid.

From July 9, 1924, until May 11, 1928, the fact that airmail postage was allowed to be used only on airmail was not clearly stated in postal regulations.

However, starting with the announcement in Postal Bulletin 14687 (May 11, 1928), until Dec. 15, 1975, it was clear that airmail postage could be used only on airmail letters, including for the payment of special service fees.

From the latter date until the present day, airmail postage stamps could be used to pay both regular postage and fees for special services.

In my experience, examples are rarely seen of the invalid use of airmail postage where the misuse was caught and penalized.

In fact, until I found the two examples shown in this column at last September’s Seapex stamp show in Tukwila, a suburb of Seattle, I had seen only two such examples.

Because it was subsequently marked due 2¢, it was presumably mailed after Jan. 7, 1968, when the airmail rate increased to 10¢ for letter mail weighing up to 1 ounce.

Thus, a postal worker correctly noted “NOT AIR MAIL,” then the marking “THIS STAMP CAN BE USED/FOR AIR MAIL ONLY,” and finally, “POSTAGE DUE 2 CENTS.”

That is, the airmail stamp could only be used for airmail service, and because it was placed on an inadequately franked letter (for airmail service), all these manuscript and handstamped markings were necessary and were applied.

Incidentally, in the same vein, but more commonly found, are uses of airmail envelopes not paid at the airmail rate (usually paying at the surface rate), where they are returned for the proper (airmail) postage.

Note that the handstamp on the first cover where the word “ENVELOPE” is crossed out recognized this more common occurrence.

In the second illustration, we see an August 1968 envelope also inadequately and incorrectly franked with an 8¢ airmail stamp (another Jet Airliner over Capitol).

Therefore, the handstamp “AIRMAIL ENVELOPES OR STAMPS/NOT GOOD FOR REGULAR MAIL” was applied, and 2¢ was due to make up the correct domestic 10¢ airmail rate for up to 1 ounce.

This pair of covers is remarkable.