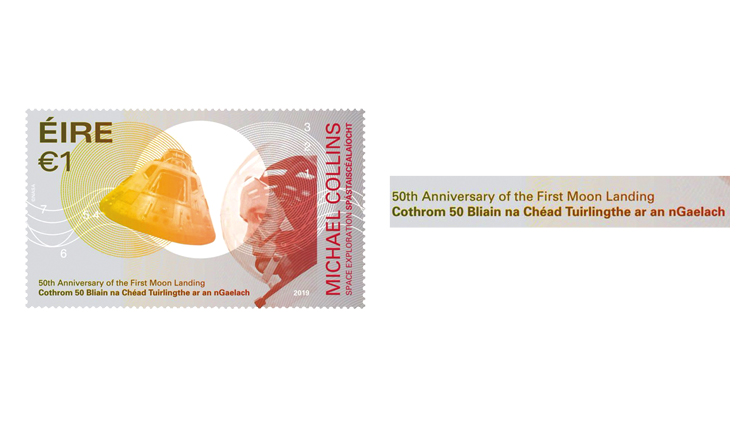 Ireland’s An Post has apologized for a spelling mistake on two of the stamps in its new Space Exploration set of four.

The two stamps featuring Apollo 11 astronauts Neil Armstrong and Michael Collins are inscribed in English, “50th Anniversary of the First Moon Landing.” The spelling mistake occurs in the last word of the Irish-language inscription, which is below the English text.

According to news reports from RTE (Raidio Teilifis Eireann, the national public service media of Ireland) and other sources, the Irish word for moon, “gealach,” is misspelled “gaelach,” which means “Irish.”

In its apology, An Post said: “While the original Irish text was correct, the transposition of letters in a later draft was not picked up during final proofing, ahead of the printing and release of the stamps on July 4th last.”

An Post added that it has taken steps to prevent such mistakes in the future.

In announcing the stamps, An Post reported that Armstrong, the first man to walk on the moon, has ancestral roots in County Fermanagh.

The Irish roots of Apollo 11 command module pilot Collins “can be traced to the town of Dunmanway, County Cork, from where his grandfather, Jeremiah Collins, emigrated in the 1860s,” according to An Post.

Coleman participated in a July 18 unveiling ceremony for the new stamps in Dublin.

The stamps were printed se-tenant by Cartor Security Printing in a pane of 16 and in a souvenir sheet of four.