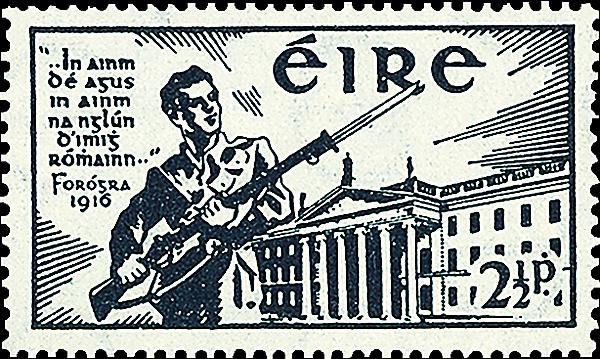 The General Post Office in Dublin, Ireland, served as the headquarters for insurgents during the 1916 Rising. An Post, the Irish postal administration, plans to construct a permanent exhibition center to commemorate the centenary of the rebellion.

The postal administration of Ireland, An Post, announced in late March that the Dublin city council has approved development of An Post’s extended exhibition and interpretive center named GPO: Witness History.

The GPO (General Post Office) was constructed in 1818 to serve as the headquarters of the Irish post office.

It became the center of operations for insurgents during the 1916 Easter Rising, and is commemorated as such on a 2½-penny stamp issued in 1941 to mark the 25th anniversary of the rebellion.

An Post notes that the proclamation of the Irish Republic was read on the steps of the building, signaling the start of the Rising.

“It was extensively damaged during the ensuing battle and a subsequent fire,” according to An Post, “and was reconstructed in 1925 before re-opening in 1929.”

The GPO in Dublin today serves as the An Post headquarters.

“The new centre will extend from the GPO’s main public post office hall, incorporating most of an inner courtyard and some current An Post offices at the rear,” An Post reports.

The new exhibition center, measuring more than 16,000 square feet, is planned to open in 2016 with a permanent exhibition marking the centenary of the 1916 Rising, which sought to end British rule in Ireland and establish Ireland as an independent nation.