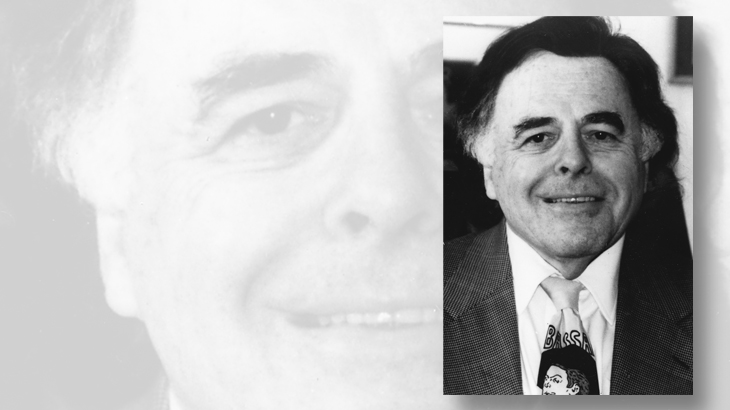 Throughout the 1970s, Irwin R. Weinberg gracefully negotiated life in the public spotlight as an owner of the world’s most valuable stamp, the famed 1856 British Guiana 1¢ Magenta.

He was preceded in death by his wife, Jean, in 1998, and is survived by daughter Jan and sons Robert and John.

Mr. Weinberg was one of nine investors who purchased the 1¢ Magenta stamp in 1970 for $280,000. A lifelong collector and a stamp dealer for some 30 years at the time, he became the face of the consortium, explaining that the other members were primarily businessmen seeking a hedge against inflation.

He regularly traveled with the valuable stamp in a briefcase handcuffed to his wrist and accompanied by armed security. In 1978, he and the stamp became even more inseparable during Capex, the Canadian International Philatelic Exhibition, when a key snapped off in the handcuff, and efforts to cut through the chain with a hacksaw were unsuccessful. A spare key was eventually obtained.

Weinberg told the Ottawa Journal that year that he displayed the iconic stamp at exhibitions in part to enhance its value, but also because he believed that youngsters should have a chance to see it.

After a decade of ownership, the group placed the stamp with Robert A. Siegel Auction Galleries in 1980, and it was purchased anonymously by chemical heir John E. du Pont, who paid $935,000 at auction. When the stamp was auctioned two years ago, it was bought by shoe designer, philanthropist and philatelist Stuart Weitzman for just under $9.5 million. Mr. Weinberg was present when the auctioneer’s hammer fell. His penciled initials, “I.W.” remain on the back of the stamp along with the marks of other past owners.

In 1995, U.S. Representative Paul E. Kanjorski introduced into the Congressional Record a salutation to Mr. Weinberg. Kanjorski commended him for his interest in civil rights, and recalled taking Weinberg as a guest to the White House to meet Nelson Mandela, whom Mr. Weinberg looked to as a hero.

“Irwin Weinberg has collected stamps since he was 12 years old,” said Kanjorski. “When he was 18 he issued his first weekly price list which he still publishes the same way, on an old mimeograph machine … In this business he is respected throughout the world.”

The same year, Mr. Weinberg received an honorary doctor of laws degree from the Dickinson School of Law in Carlisle, Pa.

In an announcement issued prior to the ceremony, the school praised Mr. Weinberg for his expertise and his integrity, and shared his thoughts about his long career in philately.

“The greatest way to communicate with someone is in the realm of his hobby,” he said. “It opens doors to meeting people that you otherwise would not meet.”

In 2009, Mr. Weinberg was inducted into the American Stamp Dealers Association’s hall of fame.