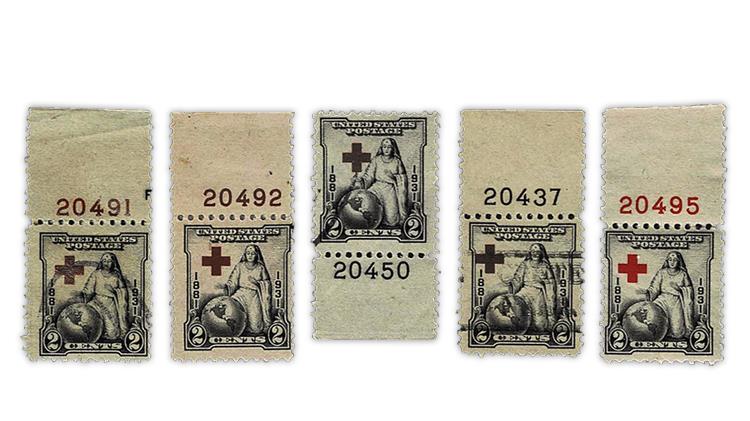 Figure 1. Only the 1931 Red Cross stamp at far right is a normal example with the cross in red. The other four examples are varieties that occurred when black ink was wiped into the red of the cross, leaving it darker than intended. 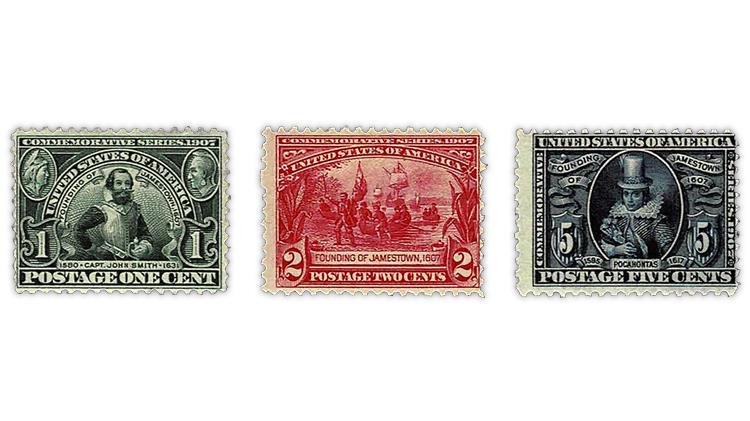 Figure 2. This set of 1907 Jamestown Exposition commemoratives is the subject of an investment company’s expertizing certificate that describes it in flowery terms but fails to mention some problems. 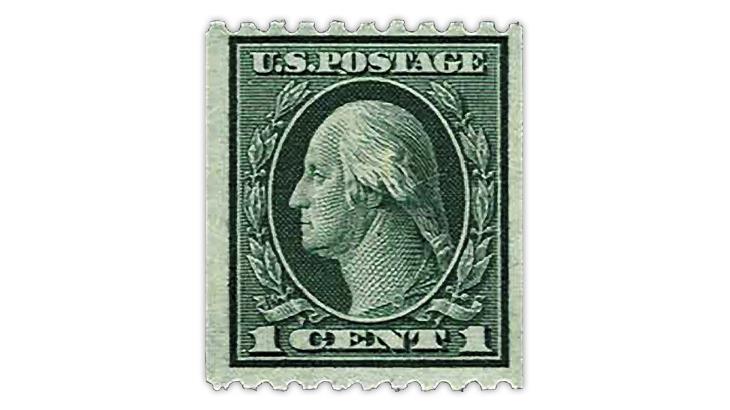 Figure 3. When is a coil the same as a sheet stamp? Never. However this 1¢ Washington coil stamp is labeled on a private certificate as Scott 405, a perf 12 by 12 sheet stamp.
Previous
Next

A correspondent recently sent a note complaining about an expertizing opinion on a stamp similar to the ones shown (with a normal example) in Figure 1. This 2¢ Red Cross stamp was issued in 1931 to commemorate the 50th anniversary of the American Red Cross (Scott 702).

The correspondent had sent his stamp in for expertizing in hopes that the cross on the stamp was a rare unlisted lake shade, instead of red.

He was disappointed. The expertizing certificate he received stated: “United States, Scott 702, unused, hinge remnant, original gum. Color of cross is red with black ink wiped into the red ink. A freak, not an error, which would require that it be an incorrect ink. Genuine.”

That is correct. It is not a color variety caused by the wrong ink being applied. While it would be collectible as a variety, it is not eligible for a listing in the Scott Specialized Catalogue of Stamps and Covers as an error.

It is not scarce, as the examples in Figure 1 show, nor is the effect consistent. Examples can run from slightly dark to heavily blackish.

It is always good for collectors to get the facts, even if their dreams are dashed. Perhaps a motto for expertizers might be “No mysteries!”

Certificates of dubious value masquerading as something they are not

It pains me to share the story about a set of three 1907 Jamestown Exposition stamps (Scott 328-330) that I was offered.

Figure 2 shows the three stamps. The 1¢ Captain John Smith stamp is reperforated on at least two sides, and the gum has been repaired. The 2¢ Founding of Jamestown has small faults visible from the back. Both the 2¢ stamp and the 5¢ Pocahontas show indications of gum adjustment to cover hinges that had been affixed. And yet, this set comes with a positive certificate.

The certificate was from the seller, not from an expertizing house.

I wrote about the four major expertizing houses in the United States in the U.S. Stamp Notes column in the May 18, 2020, issue of Linn’s and explained the benefits of obtaining a certificate from one of them:

In that column, I wrote: “There are several individuals who expertize stamps and covers and some specialty societies that will give an opinion on items in their areas. In no way do I want to denigrate their work or competence. That said, the most widely accepted and respected certificates are those from what I call the big four: the American Philatelic Society’s Expertizing Service, Philatelic Foundation, Philatelic Stamp Authentication and Grading, and Professional Stamp Experts Inc."

I also answered the question of why a certificate from an expertizing house was more desirable: “First they all have several reviewers look at any given patient (the item submitted for expertization). That means that the patient will get a more thorough examination …. “Often lone expertizers and expertizers for societies will also expertize for one or more of the big four services. In their fields they may be excellent, but the big four expertize the widest range of material and their multiple eyes on each patient have made their certificates instantly acceptable by professionals in the trade.”

In the case of the Jamestown Exposition stamps, the certificate was on the stationery of the company selling the stamps.

In describing the stamps, the certificate mentioned the stamps’ coloring and crisp images and added that in their opinion the set would retain a very high grade of VF-90.

There was no indication that the set had ever been submitted for grading.

I translated the rest of the creative description on the certificate to mean that these stamps are normally printed and you should look at the designs, not the perforations, centering nor the back of the stamps. And that because of the colorful sharp and crisp images, you should spend your hard-earned money on this set because it might attain a high grade if submitted for grading, making a terrific investment.

I have a similar dubious certificate from a different self-described expert committee. It shows a photograph of the 1¢ green Washington shown in Figure 3. The certificate describes this stamp as Scott 405, the 1¢ green issue of 1912, adding that it is a genuine U.S. postage stamp, unused with original gum.

What is true about this stamp? It is 1¢, it is green, it is a genuine U.S. stamp and it does have original gum.

What is not true?

It is not original gum in the context that reputable expertizing houses use the term. When they say original gum, often abbreviated OG, without further description that means the stamp has never been hinged. This stamp has been hinged, lightly.

And what does that say about the so-called expert who evaluated the stamp for the certificate?

I don’t know what the sellers charged, but I imagine it was too much for what was being sold.

Dealers who focus on selling stamps to uninformed investors may rely on the hope that the buyer will tuck the purchase or purchases away in a safe deposit box or elsewhere to be accessed several years later when the buyer decides to sell, having allowed enough time for the investment to appreciate.

In such cases, when the owner goes to sell the stamps, he or she discovers that not only has the original purchase not appreciated in value, but that the certificates are useless and the stamps are not as represented. At best the certificate skates around the problems with the stamps, and at worst it gets the identification wrong.

Does the buyer of these stamps with certificates have a legal leg to stand on if he or she wants a refund from the original seller? In the two aforementioned examples, the answer is “perhaps” in the case of the Scott 405/441 as the identification is wrong. But the Jamestown Exposition set is properly identified and what is said is not so much wrong as just not the whole truth.

But there is a good chance that the original sellers and creators of these certificates are long gone, although they may be still doing the same sort of business under a different identity and in a different location.

The lesson here is “pay attention to the label.” Certificates from the APS, PF, PSAG and PSE are backed by reputable organizations, with longtime expertizers that have operated for years using ethical and objective standards. Their certificates are instantly acceptable in the marketplace.

Some longtime dealers and specialty societies also are expertizing. Be certain that dealers are members of the APS and or the American Stamp Dealers Association, and can provide objective qualifications. Societies should be an APS affiliate and be able to prove that they have years of experience and a list of qualified expertizers who are longtime students in their chosen fields.

Anyone can print a fancy-looking certificate, but not all certificates are worth the paper they are printed on.