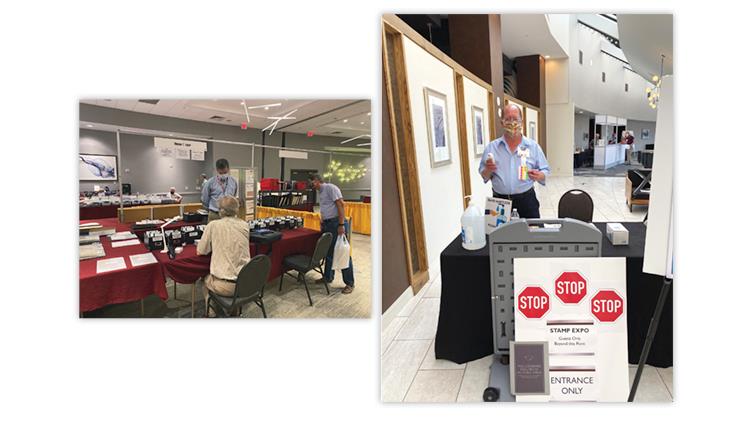 Stamp dealers, collectors and all attendees were required to wear masks and have their temperatures checked at the St. Louis Stamp Expo. Held Aug. 14-16 in Missouri, this was the first large stamp show to take place in the United States since March. Photo 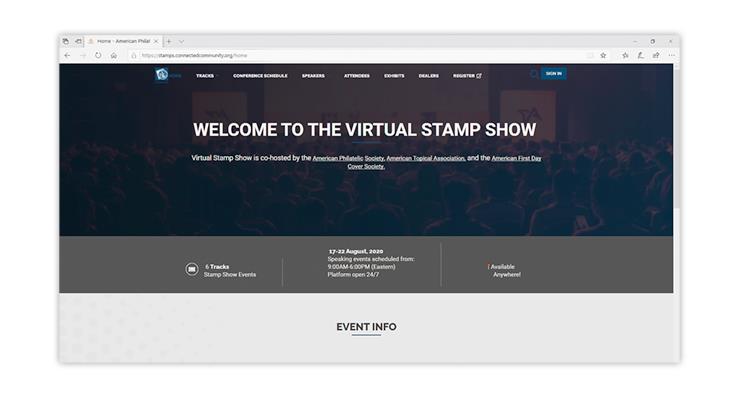 The American Philatelic Society, the American Topical Association and the American First Day Cover Society hosted the Virtual Stamp Show Aug. 17-22. A screenshot of the landing page is shown.
Previous
Next

The COVID-19 pandemic has definitely had an impact on in-person events in philately and beyond. That’s an understatement. But in August there were two firsts in the stamp collecting world: a virtual stamp show hosted by three major stamp societies and the first in-person national-level stamp show in the United States since March when states and cities began issuing stay-at-home orders.

I wonder if a combination of these two will become the new normal.

The in-person stamp show was the St. Louis Stamp Expo held Aug. 14-16. Alex Haimann, who attended the show, reports on the event on page 12 of this issue of Linn’s. His article could almost be used as a guidebook on how future shows could potentially be held for the safety of all.

Large venues with fewer dealers and collectors attending might be more of what to expect for future shows.

The two photographs from the St. Louis Stamp Expo shown nearby illustrate the requirement of wearing a mask and the taking of temperatures before entering the expo.

Few national-level stamp shows are still on the calendar to take place this year. Linn’s will continue to monitor any changes.

When I was writing this column, the online event had just started so I am unable to provide feedback on how it is or how well it was received.

According to the APS website, as of mid-August, nearly 3,000 had registered to “attend” the virtual event.

In my Philatelic Foreword column in the July 27 Linn’s, I posed the question, “What are collectors, dealers and groups looking for in digital options for future shows?”

That said, I would like to hear feedback from collectors on what they think about the future of stamp shows or how they feel the Virtual Stamp Show went.

The feedback may be used in a future column or perhaps on the Letters to Linn’s page. Send comments via email to jbigalke@amosmedia.com or by mail to my attention, Linn’s Stamp News, Box 4129, Sidney, OH 45365.