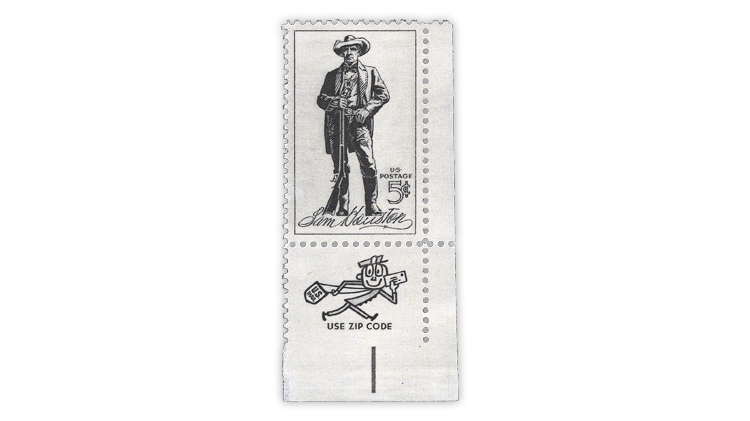 The issuance of the 5¢ stamp honoring Sam Houston was delayed a month because of the assassination of President John Kennedy. It was the first U.S. commemorative to include a ZIP code message, a fixture on U.S. stamp sheets for the next 30 years.

On Nov. 22, 1963, I like many others was jolted from my comfortable existence as a college student by the assassination of President John F. Kennedy. The related events that followed kept just about everyone in the United States glued to their television sets during the next week.

One of the little ripples that flowed out from this was the decision by the United States Post Office Department to delay the planned Dec. 13, 1963, issuance of a 5¢ stamp to honor Sam Houston to a date beyond the 30-day period of mourning for President Kennedy.

Another consideration was the thought that it would be inappropriate to issue a stamp showing a Texan with a rifle so soon after the assassination.

Whatever the reasons, the 5¢ Sam Houston stamp (Scott 1242) was not issued until Jan. 19, 1964. And when it was, it became the first commemorative to feature Mr. ZIP in the margin, as shown here.

Mr. ZIP went on to become a fixture on U.S. sheet stamps for 30 years until he disappeared in 1994. By then, the U.S. Postal Service probably thought the public had gotten the message.

Who is Marjorie Chandler?