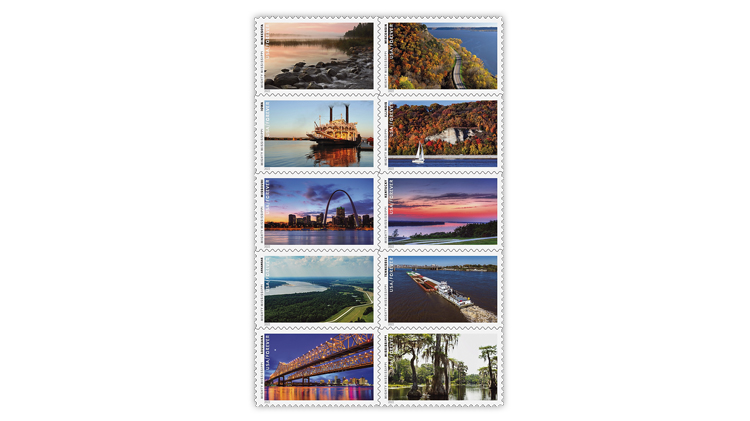 On Jan. 13 the United States Postal Service revealed issue dates and first-day ceremony locations for upcoming stamps in its 2022 program. The 10 Mighty Mississippi forever commemorative stamps are slated to be issued May 23 in Memphis, Tenn.

The United States Postal Service announced Jan. 13 issue dates and locations for a number of upcoming stamps in its 2022 program. Except where noted, a first-day ceremony is planned for each issue.

A first-day ceremony will be held March 3 in Washington, D.C., for the four Title IX forever commemorative stamps. The issue honors the 50th anniversary of the law that forbids discrimination on the basis of sex in educational programs that receive federal funding.

Five stamps featuring works by George Morrison (1919-2000), an Ojibwe landscape painter from Minnesota who was a seminal presence in Native American modernism, are to be issued April 29 in Grand Portage, Minn.

A forever commemorative stamp honoring pioneering marine biologist Eugenie Clark (1922-2015) is set to be issued May 4 in Sarasota, Fla. The stamp features a digital collage by Amanda Phingbodhipakkiya that incorporates a photo of Clark and a lemon shark.

Memphis, Tenn., will play host to the May 23 first-day ceremony for 10 Mighty Mississippi stamps. Each stamp shows a photograph representing a different state along the Mississippi River’s 2,340-mile length.

The Mighty Mississippi stamps are to be issued in a pane of 20, the back of which will show “a map of the central United States, detailing the river and its major tributaries,” according to the Postal Service.

The $2 and $5 Floral Geometry stamps depicting geometric floral patterns are to be issued June 20 in Kansas City, Mo., in panes of 10 and panes of four, respectively. A first-day ceremony is not planned for these two stamps.

“Due to COVID-19 restrictions, some releases may have a virtual first-day-of-issue ceremony or no ceremony. Dates may be subject to change,” the Postal Service said.