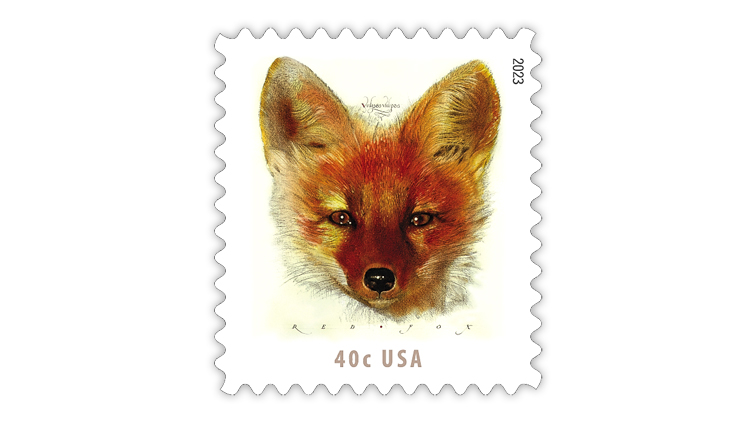 The United States 40¢ Red Fox stamp is set to be issued Jan. 5 in Fox, Ark. The U.S. Postal Service revealed on Nov. 30 the issue dates and locations for eight additional 2023 stamps.

The United States Postal Service has announced issue dates and locations for a number of stamps in its 2023 program.

San Francisco will host the Jan. 12 ceremony for the Year of the Rabbit stamp, the fourth issue in the Postal Service’s planned series of 12 Lunar New Year stamps.

The pair of Love stamps picturing a kitten and puppy are to be issued Jan. 19 in Austin, Texas.

Two stamps will make their appearance on Jan. 22, the day that new postal rates go into effect. The $28.75 Great Smoky Mountains Priority Mail Express stamp will be issued in Gatlinburg, Tenn., and the two Sailboats postcard-rate stamps will be issued in Lahaina, Hawaii. Both stamps will arrive without an official first-day ceremony.

The 46th stamp in the Black Heritage series honoring author Ernest J. Gaines is to be issued Jan. 23 in Lafayette, La. This will be the first commemorative forever stamp valued at the new 63¢ first-class rate.

“Additional stamps and first-day-of-issue cities/ceremony locations will be announced throughout the year,” the USPS said. “Dates and locations may be subject to change.”