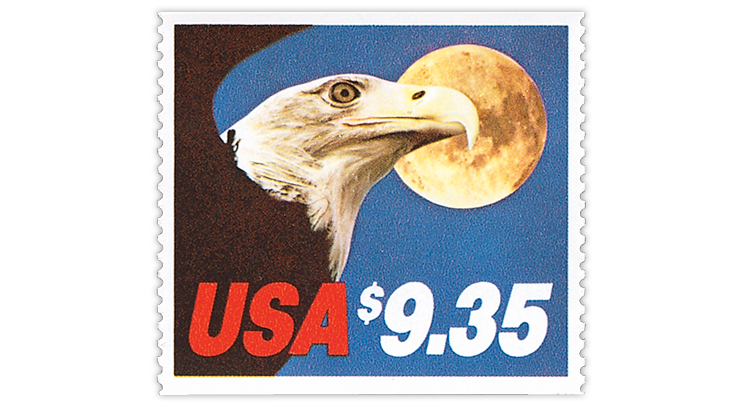 The cartoon caption contest image for August is the United States 1983 $9.35 Express Mail stamp showing a bald eagle named Igor. Entries must be received by Aug. 26 for a chance to win a prize.

Talk to the Animals was a popular song recorded originally by Rex Harrison for the 1967 film Doctor Doolittle. The song begins, “Oh, if I could talk to the animals, just imagine it … .” And the payoff line near the end, “And they could squeak and squawk and speak and talk to me,” completes the thought.

The August cartoon contest offers a chance to take the dream a little further.

I’m a great fan of the art on the early Express Mail stamps showing the American bald eagle, especially the first one (Scott 1909) issued in 1983. Its $9.35 denomination paid the basic under 2-pound rate for next-day delivery.

It happens that we know the identity of the model from which the stamp art was developed. She was Igor, a bald eagle from Canada. The Canadian fishermen who found her as an eaglet named her before they knew she was female.

The photo used for the stamp was taken in 1975 by Tom McHugh of Los Angeles. The USPS purchased the photo of Igor for $9,000, which covered complete ownership and unlimited reproduction rights.

Here we are almost 40 years after the stamp was issued, and the Express Mail charge is not quite triple the original rate. How would Igor feel about that?

Or what would she say about her iconic appearance on stamps, today’s Express Mail stamps, modern politics, or patriotism?

The 1983 $9.35 Express Mail stamp showing Igor will be the cartoon caption contest stamp for August. Your task is to put yourself behind that stern face and tell me what she might be saying or thinking about the aforementioned subjects or anything else that occurs to you.

Entries must reach me no later than Aug. 26.