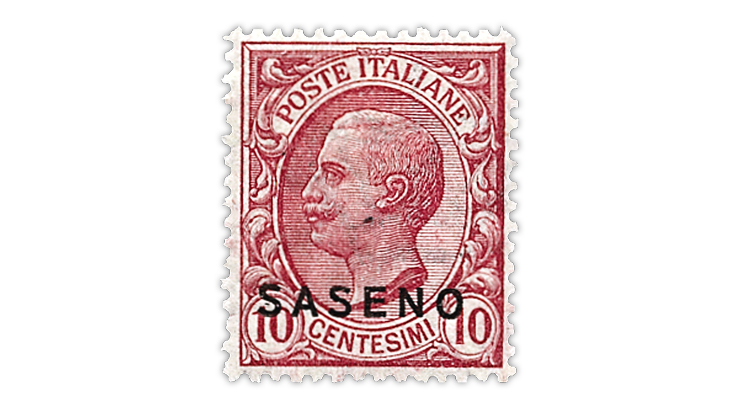 The 1923 set of eight Saseno stamps (Scott 1-8) forms a complete country collection and is a good buy at full 2019 Scott Classic Specialized Catalogue of Stamps and Covers 1840-1940 values.

Saseno (Sazan in Albanian) was one of the more obscure Italian possessions. The largest Albanian island, it lies a few miles off the coast at the entrance to the Bay of Vlore. Although strategically located, the island has lacked a permanent population for much of its history. It belonged at various times to Venice, the Ottoman Empire, and even the British Empire (as part of the Ionian Islands).

Although ceded to Greece in 1864, it was occupied by the Turks until 1912, when the Greeks liberated it in the First Balkan War. Italy and Austro-Hungary pressured the Greeks into withdrawing, and it was claimed and occupied by Italy on Oct. 30, 1914.

To strengthen their hold on the island, the Italians settled a few fishing families there, while building a lighthouse and establishing a naval base. After World War II, Italy ceded the island back to Albanian in 1947 as part of the peace treaty formally ending the war.

In 1923, Italy overprinted one set of eight definitive stamps “Saseno” for use on the island (Scott 1-8). The 2019 Scott Classic Specialized Catalogue of Stamps and Covers 1840-1940 values the set in unused hinged condition at $200 and in used condition at $660, with the used value in italics. These stamps find their market with Italian, Albanian and classic stamp collectors. The 10-centesimo stamp (Scott 1) is also popular with Scott No. 1s of the world collectors.

Italian stamps of the period are notorious for poor centering. Not only do the designs take up most of the face of the stamp, the perforations are usually not well aligned, often cutting into the design on one or two sides.

You can easily find this set in unused hinged condition with most of the stamps in average to fine grades at 20 percent to 40 percent of Scott catalog value. Examples in the grade of fine-very fine sell for 50 percent to 75 percent of Scott catalog value. Stamps without faults in true very fine grade are well worth full catalog value. The best way to assemble a true very fine set is stamp by stamp. You could also several buy sets and pick out the ones with the best centering to form a set. Avoid used examples unless you are specializing in this area, and even then expertization is a must.