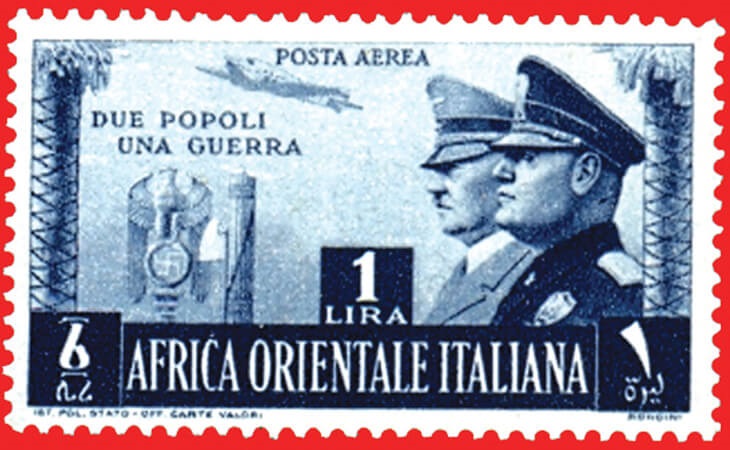 This stamp depicting Hitler and Mussolini is one of many that would be barred from trade, sale, and exhibition by a bill being considered by the Italian Parliament.

Sixty-four members of the Italian Parliament have thrown their support behind a bill that would eliminate the trade, sale, and overall circulation of postcards, stamps, coins, or medals that depict any fascist or Nazi symbolism, mottos, faces, or swastikas, according to an article in the Spring 2016 issue of Fil-Italia.

Sen. Carlo Giovanardi, a stamp specialist himself, was quoted as saying that the proposed bill would impact thousands of collectors if passed.

The article's author, Danilo Bogoni, was turned off by that idea, writing that he hopes the bill “will be buried by the dust of the archives.”

“Under the axe of such legislation, if passed, will come the world of collectibles criminalizing innocent stamp collectors who, far beyond any consideration of ideology, help to document a chapter of recent Italian history that is left to historians to assess,” Bogoni writes. “Moreover, no one has the right to wipe out our history, especially by rattling of hand-cuffs.”

Among the Italian stamps that Bogoni points out would be banned from sale if the bill became law are stamps a 1938 set saluting the Proclamation of the Empire, which features Mussolini quotes, and stamps saluting the Italo-German Friendship of 1941.

What do you think of the idea of banning the sale of items displaying fascists and their symbols? Share your opinion in the comment section below.

With a population of 25 million, Africa’s seventh biggest country also boasts some incredible wildlife — and some stamps to honor it.

In their latest Stamp Market Tips column, Henry Gitner and Rick Miller dive into the attractive and popular African Wildlife set (Scott 362-381) of 1953.

A cover from Troy, NY, that was sent to Massachussetts has caught they eye of Linn’s U.S. Stamp Notes columnist John Hotchner.

“The ... cover has a nicely canceled 3¢ Washington (Scott 26) dated Sept. 10, 1858. The stamp is set into a fancy illustration of undetermined origin and meaning.

“What is puzzling is that the dealer selling the cover labeled it ‘Northern Protest.’”

Hotchner is asking for any reader insight into what that term means.