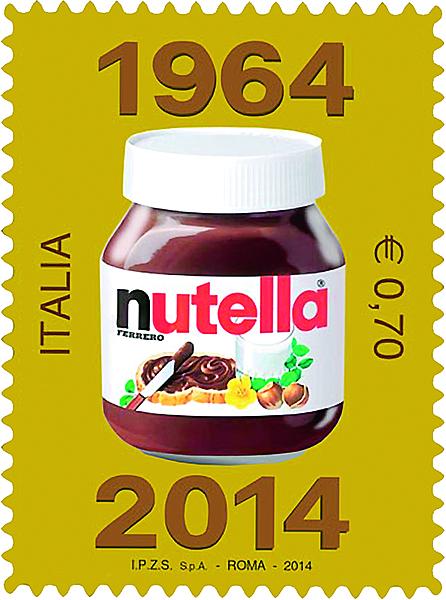 An Italian stamp commemorates the 50th anniversary of Nutella, created by the Italian company Ferrero.

On May 14, Italy issued a stamp devoted to Nutella, the hazelnut spread that is celebrating its 50th anniversary this year.

The Nutella stamp is part of a series with the theme of the excellencies of the productive and economic system.

The Italian confectionery company Ferrero began marketing Nutella in 1964, but it had its beginnings two decades earlier.

The United States website for Nutella, www.nutellausa.com, provides this brief history: “Nutella® spread, in its earliest form, was created in the 1940s by Mr. Pietro Ferrero, a pastry maker and founder of the Ferrero company. At the time, there was very little chocolate because cocoa was in short supply due to World War II rationing.

“So Mr. Ferrero used hazelnuts, which are plentiful in the Piedmont region of Italy (northwest), to extend the chocolate supply.”

According to a press release from Ferrero announcing the 50th anniversary, today Nutella is available in more than 100 countries with a total sales volume of 365 thousand tons. Nutella also has 25 million followers on Facebook.

Italy’s government printing office printed the self-adhesive Nutella stamp by rotogravure in sheets of 11. The printing quantity was 2.7 million stamps.