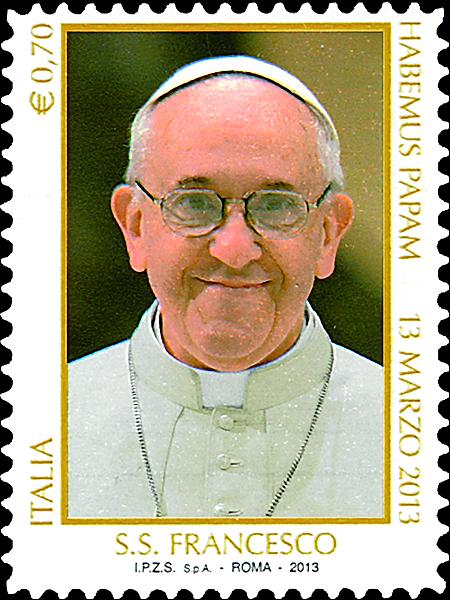 This Pope Francis stamp from Italy was voted as the best stamp of 2013 from Italy, San Marino or the Vatican City in a poll conducted by the Italian-language magazine Il Collezionista.

An Italian stamp featuring Pope Francis received an award for the best stamp issued by Italy, San Marino and the Vatican City in the year 2013.

This award, francobollo d’oro (Italian for stamp of gold), is determined by readers of the Italian-language magazine Il Collezionista (the Collector) published by Bolaffi, an Italian stamp, coin and collectibles firm.

Collectors also could use the magazine’s web or Facebook pages to vote for their favorite stamp among the 114 issued in 2013 by the three postal administrations.

The winning stamp was issued May 2, 2013, to commemorate the election of Jorge Mario Bergoglio as pope on March 13 of that year. It is part of a joint issue with Argentina and the Vatican City.

According to information sent to Linn’s by Giorgio Migliavacca, this was the 59th poll conducted by Il Collezionista. Italy has won the top prize 32 times, San Marino 21, and the Vatican City seven.