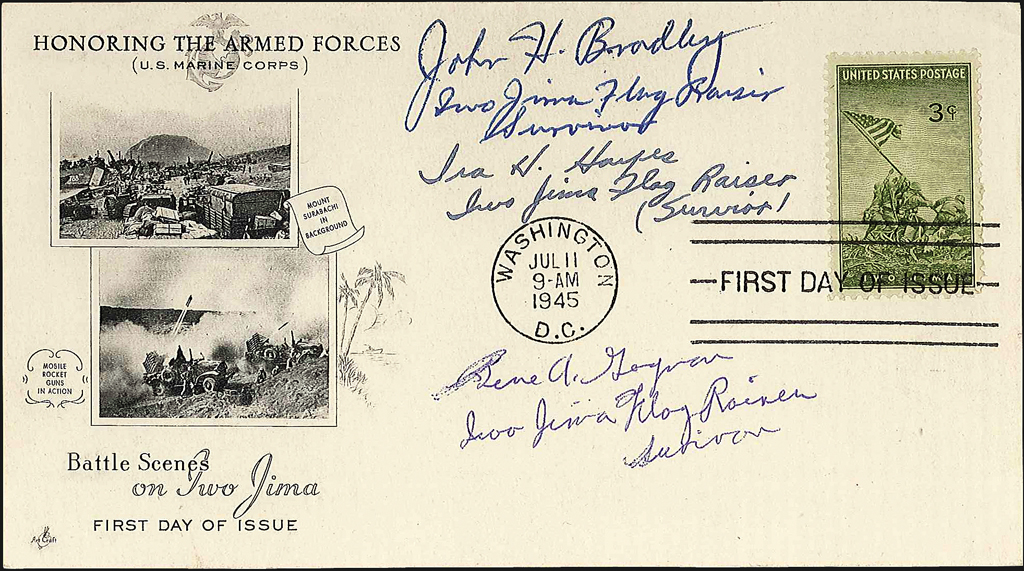 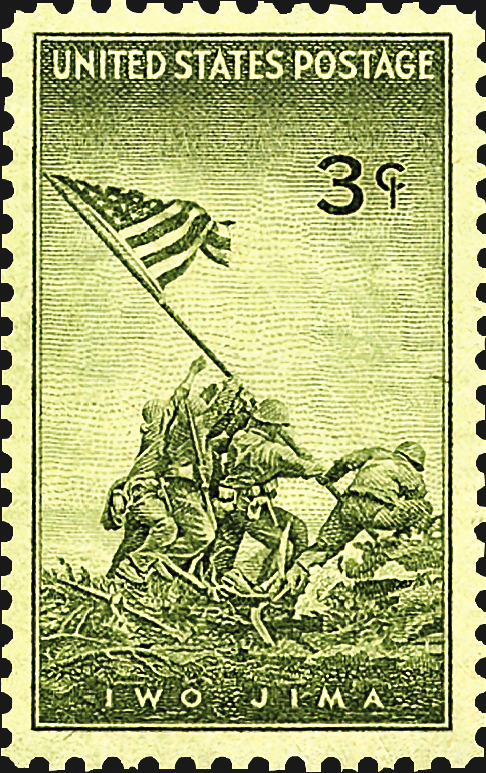 The 1945 3¢ Iwo Jima (Marines) stamp (Scott 929). The stamp design is based on the famous photograph taken by Joe Rosenthal of the second flag raising on Mount Suribachi.

As a United States Marine, historian and avid collector, I have been researching, writing about  and giving talks on World War II and the Battle of Iwo Jima for more than 40 years.

In the Pacific Theater during WWII, the Marines carried out a bloody island-hopping campaign toward Japan.

On Feb. 19, 1945, they invaded Iwo Jima, a small, well-defended and heavily fortified volcanic island about 700 miles south of Tokyo.

The highest point on Iwo Jima was Mount Suribachi, an extinct volcano near the southern end of the island.

On Feb. 23, after heavy fighting and many casualties, the Marines were ordered to take Suribachi. One of the patrols going up the mountain carried a small U.S. flag to be raised, if they made it to the top.

They did make it to the top and raised the flag using a pipe scavenged from debris as the flag pole.

Morale momentarily soared for those fighting for their lives below and on ships and boats at sea, when they saw the flag flying atop Suribachi. But there still was a lot of fighting and dying to come.

Later, Lt. Col. Chandler Johnson, the battalion commander of the Marines who raised the first flag, was told that the secretary of the Navy was coming ashore to observe the battle, and he wanted the flag as a souvenir.

The Marines atop Mount Suribachi had other ideas.

Chandler sent a Marine down to the beach to get another flag from a landing ship.

That flag was sent along with a routine patrol to the top of Suribachi.

Soon after, Associated Press combat photographer Joe Rosenthal, who did not know of the Marines’ intentions to raise the second flag, went up the mountain to take some photos.

When the new flag arrived at the top of the mountain, the officer in charge said the first flag wasn’t coming down until the second flag was up.

Seeing what was about to happen, Rosenthal scrambled for a good position. As the Marines started to raise the second flag, he took a quick shot.

Rosenthal had no idea how his photo would turn out. His film along with that of other combat photographers was sent to Guam by air the next day for developing and processing.

After processing, the photo was sent by wire to the United States where it caused a sensation and quickly became famous.

Rosenthal, still on Iwo Jima, had yet to see how the photo turned out.

Organized enemy resistance was declared at an end on March 25, 1945. In the Battle of Iwo Jima, there were about 26,000 U.S. casualties, mostly Marines.

Even before that now famous photo of the second flag-raising, pressure was building to have stamps issued honoring the military. The Rosenthal photograph brought things to a head.

On June 11, the Post Office Department sent out a postal card announcing the scheduled issuance of a 3¢ purple Iwo Jima stamp.

Purple was the designated color for 3¢ stamps paying the first-class letter rate.

The color and the fact that living people (three of six men in the photo survived the battle) were shown on the stamp caused quite a furor.

Postal authorities quickly changed the color of the stamp to Marine green.

Objections to living people being represented in the stamp design were overcome by noting that the stamp honored the fighting spirit of the Marines on Iwo Jima, not specific individuals.

The Marines went on to fight and die for their country in many other battles.

And Joe Rosenthal had the last word on his famous photo, “I took the picture, but the Marines took Iwo Jima.”