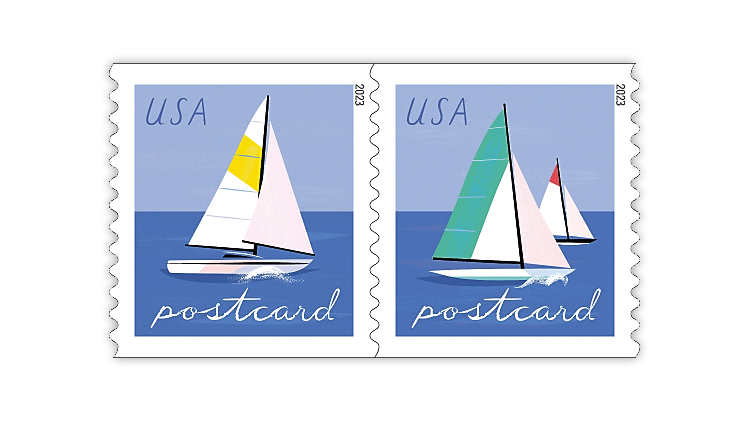 The United States Postal Service will issue two postcard-rate Sailboats stamps Jan. 22 in panes of 20 and coils of 100.

The U.S. Postal Service will issue these nondenominated (48¢) postcard-rate stamps Jan. 22 in Lahaina, Hawaii, in panes of 20 and coils of 100.

An official first-day ceremony will not be held for the Sailboats stamps, according to the Postal Service. The Jan. 22 issue date coincides with the domestic postcard-rate increase from 44¢ to 48¢.

The USPS said the stamp issue “celebrates a favorite American outdoor activity with two colorful postcard stamps featuring different graphic illustrations that capture the joyful sensation of being on the water on a beautiful day.”

Lahaina, which is on Maui, was the capital of the Kingdom of Hawaii from 1820 to 1845, and the harbor that housed 19th-century sailing ships involved in the whaling industry remains a main attraction of the town today.

The harbor is the final destination for sailors competing in the Vic-Maui Yacht Race, which starts in Victoria, British Columbia, Canada. The race is held every other year.

According to the race website, the harbor in Lahaina was open to sailors in the 2022 race from July 15-22, with the first participants leaving Victoria on July 4.

Stamp artist Libby VanderPloeg, who resides in western Michigan, designed the stamps by starting with pencil sketches and later moving to Adobe Illustrator, the USPS said. The postal agency also credits VanderPloeg with creating the lettering for the word “postcard” below the images of the sailboats.

According to the artist’s website, she studied fine art at the University of Illinois at Chicago and worked as ...