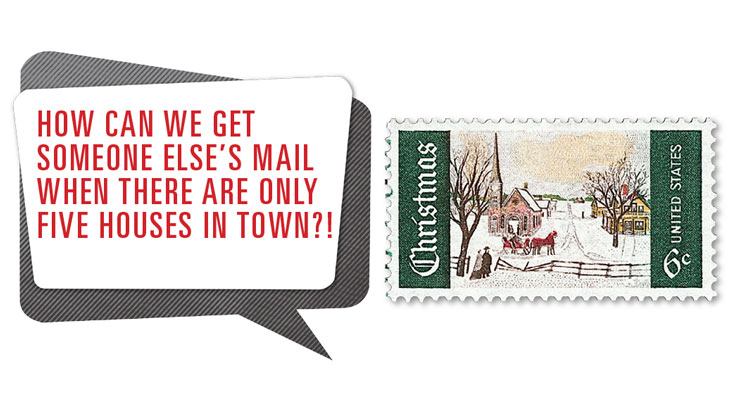 The winner of the philatelic part of the January cartoon caption featuring the 1969 6¢ Christmas stamp showing the painting Winter Sunday in Norway, Maine is Nicholas D’Amico of Kingman, Ariz., who suggests a feeling of frustration that many postal custom

With so short a time since the national elections, the January cartoon caption contest included a large number of candidate-related entries. (The contest was extended into February because of mail delivery problems.)

The stamp used for the contest was the 1969 6¢ Christmas stamp showing Winter Sunday in Norway, Maine, a painting by an unknown artist.

Among my personal favorites is this entry from Raymond Radovic of North Olmsted, Ohio, “Daddy, is that the one horse pony soldier that Mr. Biden talked about during the campaign?”

The broken fence in the foreground of the design inspired many entries, including, “Sunday driver!! Just look at our fence!” by David Jackson of Wheaton, Ill.

Several entries focused on the cold snowy scene. Michael Lomazow of Riverside, Calif., suggested, “I think the sleigh’s air conditioner is on the fritz.”

A different tack was taken by Earl Rodney of Pembroke Pines, Fla., who mirrored his own experience with “Enough of this snow already! We’re moving to Florida!”

The stamp itself seems to annoy some collectors, myself included. As Alex Johnston of East Tawas, Mich., asked, “Have you noticed how hard it can be to locate this stamp with correct alignment of the colors?”

Dave Schwartz of Commack, N.Y., also addressed this with his entry: “Honey, you better drive the sleigh home. In the snow glare, the colors seem to be moving all over the place.”

The stamp was printed on the Huck press that could apply three colors from a single plate, however, the need for two plates resulted in a high incidence of mismatched colors. The brown, background green and red chimneys and horse seem to move around quite a bit.

For the philatelic part of the contest, the winning entry was from Nicholas D’Amico of Kingman, Ariz.

Rich Wolf of Westminster, Md., won the nonphilatelic part of the contest with “No way — I was the pooper scooper guy last time!”

“Some people say I have a ‘sixth cents,’” by Dale Stout of Colorado Springs, Colo.

“Hurry up! We’ve got to stop George Bailey from jumping off the Bedford Falls bridge,” from Fred Breier of Oradell, N.J.

“Maybe we should take the jeep,” by Michael Lomazow of Riverside, Calif.

“This is Norway? Boy, did we take a wrong turn!” by Jesse Hykes of Lee’s Summit, Mo.

“Due to COVID, it looks like I’ll have to precancel my holiday plans,” by Steve Kotler of San Francisco, Calif.

Thanks and a tip of the hat to all who entered. The next contest will be announced in the April 5 issue of Linn’s.