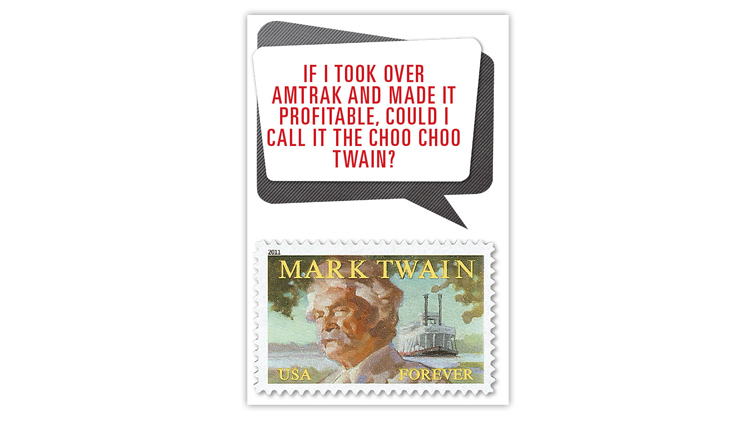 The first plays off his white suit that makes him look a bit like Colonel Sanders. Edward Hendriksen of Flushing, Mich., represents this group with, “No ma’am, I sell books, not chicken.”

The second theme refers to an often-misquoted quote from Twain. While Twain was in London in 1897, rumors began to spread in New York that he was seriously ill and perhaps dying. A reporter for a New York newspaper sent Twain a note asking for comment on these rumors.

His response to the reporter, in writing, said, “The report of my death is an exaggeration.” Somehow his words were later twisted and are commonly repeated as “The reports of my death are greatly exaggerated.”

Rich Siegel of Merrick, N.Y., among others, reinterpreted this as “Reports of stamp collecting’s death are greatly exaggerated.”

The two winners of this contest both use the Twain pen name to make their point.

Twain was born Samuel Langhorne Clemens Nov. 30, 1835. He adopted his pen name at the age of 27. “Mark Twain” comes from one of his early jobs, piloting a steamboat up and down the Mississippi River.

Crewmen would call out “mark twain” to measure the depth of water beneath the boat. Twain was a form of the word “two,” as the boat needed at least 2 fathoms (1 fathom is 6 feet) of water to be able to navigate safely.

The philatelic line winner is Frederick R. Zinkann of Montgomery, Ill., who wrote: “Commems are commems, Definitives are definitives. And never the twain shall meet.”

On the nonphilatelic side, the winner is Steve Kotler of San Francisco, Calif.

“The more I learn about people, the more I like my stamps,” from David Schwartz of Commack, N.Y.

“We need to get rid of the smoke from the stern wheeler, or we’ll risk global warming,” sent by Bill McCloskey of Bethesda, Md.

“It’s time to add another line, ‘None of the above’ on our ballots,” by Lawrence Segel of White Plains, N.Y.

“Over a century ago, I joked about incompetent and corrupt elected officials. Some things never change,” from Charles Wales of Ashburn, Va.

“Missed that one. Guess I’ll have to wait for the next ferry,” by Joel Kirschenbaum of Levittown, N.Y.

“Say, I just signed up for one of them streamin’ services, and find they censored Huck Finn!” sent in by Rich Wolf of Westminster, Md.

Thanks and a tip of the hat to all who entered. The next contest will be announced in the March 9 issue of Linn’s.