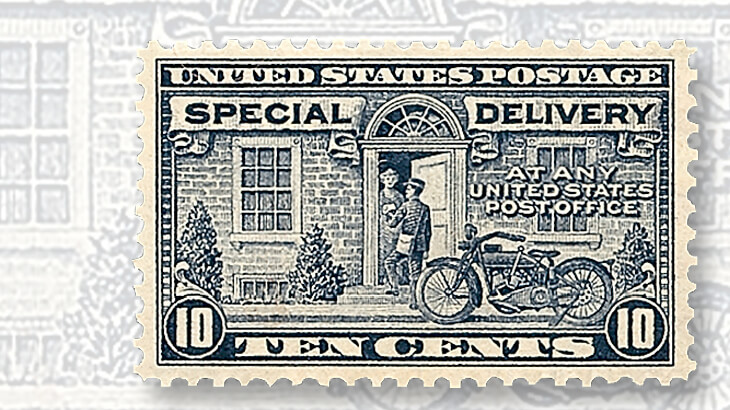 The cartoon caption contest stamp for January is the 10¢ special delivery stamp of 1922 showing mail being delivered by a motorcycle messenger. Pretend you are the motorcyclist and tell me what you’re thinking or saying about your job. Let your imagination run wild. There will be a prize for the best philatelic and best nonphilatelic lines. The rules to enter the contest are in the accompanying article. Entries must be received by Jan. 27 for a chance to win a prize.

When special delivery service was introduced in 1885, letters might be delivered with daily mail or by a postal messenger on foot or on bicycle. Later, motorcycles were used as shown on the 1922 10¢ special delivery stamp (Scott E12).

This gave added emphasis to the unofficial postal motto “neither snow nor rain nor heat nor gloom of night stays these couriers from the swift completion of their appointed rounds.”

Today, Express Mail is usually delivered during hours that post offices are open, and by United States Postal Service staff in their red, white, and blue jeeps or trucks.

For the January cartoon caption contest, I’d like you to put yourself on the motorcycle and tell me how you would be feeling about the job at hand; or your observations on the passing scene, whether related to philately, politics, postal operations, or just riding a motorcycle for a living. (I can’t resist the joke: How do you know when you’re seeing a happy motorcyclist? From the bugs on his teeth!)

To be considered for the prizes, entries must reach me no later than Jan. 27.