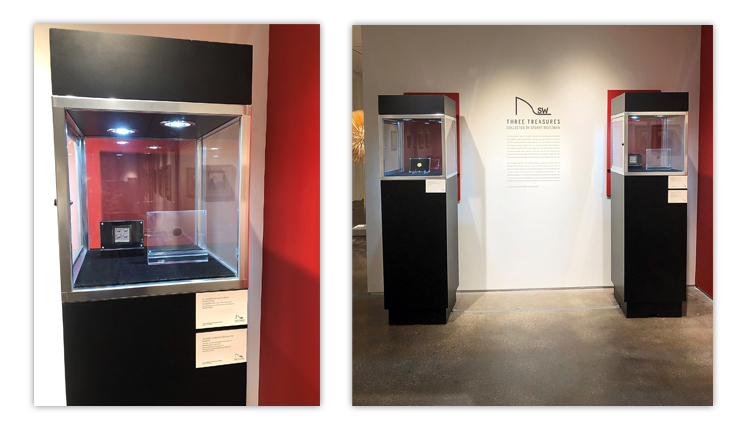 The 1856 British Guiana 1¢ Magenta (Scott 13) and the plate block of four of the United States 1918 24¢ carmine rose and blue Jenny Invert airmail error (C3a) on display in early May at Sotheby’s in New York City. Photographs by Coin World editor-at-large

We sit only a mere couple of weeks away from the sale of two iconic philatelic items by Sotheby’s in New York City on June 8.

Our coverage of the sale of the 1856 British Guiana 1¢ Magenta (Scott 13) and the plate block of four of the United States 1918 24¢ carmine rose and blue Jenny Invert airmail error (C3a) owned by shoe designer Stuart Weitzman appears on page 1 of the May 31 issue.

It will be interesting to see the commentary from the general press as well as from the stamp community after the sale.

To go with our coverage of the story, I thought it would be interesting to show how Sotheby’s gallery is displaying the two stamp rarities in May in advance of the sale.

The stamps share the same display case (probably something that won’t happen again), and the 1933 Double Eagle (the $20 gold coin also offered in the auction) is in another. Items from Sotheby’s May American art sales also are on display. For those able to view the gallery during this historic moment, it will be a sight that won’t be forgotten.