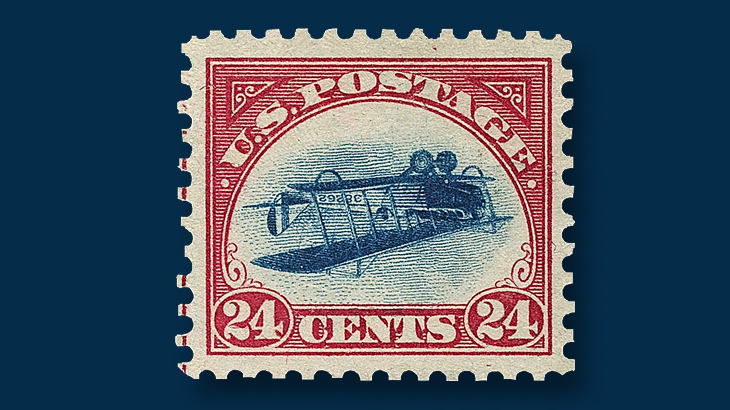 The year 2017 will soon come to a close — a year that included a number of important stories involving stamps and the collector groups supporting the stamp hobby.

It was an interesting year again for the 1918 24¢ Jenny Invert error stamp (Scott C3a). Stories about the famous stamp continue to turn up, but the most surprising one this year was the reappearance after 99 years of the position 79 stamp from the original discovery sheet of 100. Absent from public view for nearly a century, the stamp sold for $299,000 in February through Leslie Hindman Auctioneers of Illinois.

The American Philatelic Research Library benefited greatly, with the assistance of Robert A. Siegel Auction Galleries, from the sale of the position 76 Jenny Invert stamp from the McCoy block of four stolen in 1955. The single stamp was recovered in 2016. The Siegel sale realized $295,000 for the stamp, with the proceeds going to the APRL.

Fast forward in the Jenny Invert saga to the 2013 $2 version. As a promotional scheme, the United States Postal Service intentionally created 100 panes of six of an upright variety of the $2 stamp (Scott 4806a).

Like the millions of normal $2 Jenny Invert stamps that show the plane flying upside down, these rare panes showing the plane flying upright (Scott 4806d) are hidden inside sealed blind packaging. From the outside of the packaging the variety pane cannot be distinguished from the regular issue. The packages of upright Jenny Invert panes were then mixed in with the normal stamps.

In 2017 the Postal Service confirmed that 32 upright Jenny Invert panes had been reported to them. Note that the key word here is “reported.” It is likely that there are finds out there that have not been revealed to the Postal Service or to Linn’s.

Also, in late 2017, more light was cast on the distribution plan for the upright Jenny Invert via documents obtained by Linn’s that explained how the Postal Service seeded the variety into stock distributed by mail order and at post offices.

While on the subject of the U.S. Postal Service, I would be remiss not to mention collectors’ surprise that at the time of this writing the Postal Service hasn’t yet revealed any stamps for 2018. (I hope this sends a message that this information should be shared soon.)

In September 2016 the USPS revealed much of its 2017 stamp program. This early unveiling was welcomed as a positive sign by collectors.

Giving collectors and the philatelic industry only weeks, sometimes days, to prepare for a new issue puts an avoidable strain on the U.S. stamp hobby.

When collectors learn about new stamps too close to the issue date, they might miss opportunities. Cachetmakers can’t prepare designs quickly enough for their covers (late announcements contributed to the demise of a few prominent cachet lines in that field).

More importantly, the USPS has little time to prepare for a first-day event, and collectors have difficulty shifting plans around to travel to first-day ceremonies.

The lead time for a new stamp announcement should be a minimum of 90 days. For a number of stamps, the Postal Service potentially could have avoided a few headaches if it had released the designs earlier.

That brings me to another top stamp story for 2017: the stamp trial and testimony over the 2010 Statue of Liberty forever stamp dispute. Collectors may recall that sculptor Robert S. Davidson sued the Postal Service over the stamp in 2013, claiming the Postal Service had improperly used an image of his copyrighted Lady Liberty replica, which stands outside the New York, New York Hotel & Casino in Las Vegas.

The stamp design was revealed to collectors and the public only days before the stamp was issued. Had the design been unveiled earlier, perhaps the mistake of showing the Vegas version of the Statue of Liberty would have been caught and saved the Postal Service a few headaches.

A final determination on the case has not been made.

On a much more positive note, the Postal Service started its discretionary program to produce semipostal stamps that raise funds “in the national public interest.”

The first stamp in this program is the 2017 Alzheimer’s semipostal stamp. With a large print run of 500 million stamps, it appears the Postal Service is optimistic about the program. Another semipostal is set to be issued in 2019 for post-traumatic stress disorder (PTSD).

In July the Smithsonian’s National Postal Museum named a new director, Elliot Gruber, the third director in the museum’s 24 years of existence. I have had the pleasure of meeting him on a couple of occasions, and I am confident that the museum will continue to move in a positive direction and further strengthen its interaction with the philatelic world.

The American Philatelic Society’s board of directors sent a letter in mid-2017 to the president of the International Federation of Philately to express “serious concerns” about the operations and governance of the federation, which is commonly identified by the initials FIP (for its name in French, Federation Internationale de Philatelie).

The FIP involvement in international exhibitions has drawn much criticism in the United States, Great Britain and other nations. Rather than recount the issues that have been brought up in those earlier articles and in the letter, I want to express my wish that a solution can be reached. Perhaps the election of a new FIP president in 2018 will prompt positive change for the future.

Also on the APS front was the news that APS president Mitchell “Mick” Zais is expected to take on the role of deputy secretary of education in the administration of President Donald J. Trump. The confirmation process continues, and a Senate vote had not yet taken place when this issue of Linn’s went to press.

From all of us at Linn’s, we wish you the best for a prosperous and philatelically inspired 2018. The collecting adventure continues!