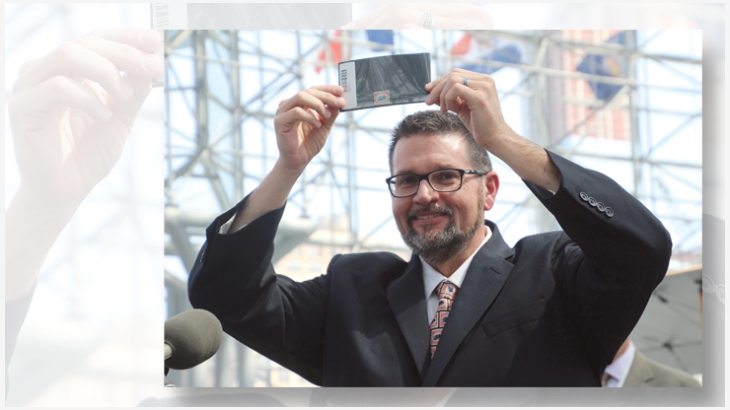 Scott English, executive director of the American Philatelic Society, holds aloft a card containing the 1918 Jenny Invert airmail error stamp that was once part of the McCoy block of four that was stolen in 1955. The stamp was recovered in early April and 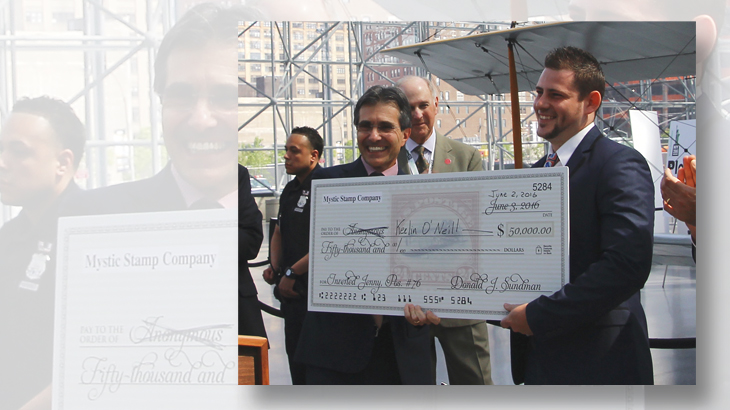 Donald Sundman of Mystic Stamp Co., left, presents an oversized check for $50,000 to Keelin O'Neill of Northern Ireland, who had inherited the recovered McCoy Jenny Invert stamp from his grandfather. In 2014, Mystic had offered a reward of $50,000 each fo
Previous
Next

The media came out in force to record the historic handover of a United States 1918 24¢ Jenny Invert airmail error stamp that had been missing for more than 60 years before being recovered in early April.

Once part of the famed McCoy block of four stolen in 1955, the recovered stamp is position 76 in the original pane of 100 stamps that show the Curtiss Jenny biplane flying upside down.

The clicking of the cameras echoed through the lobby of the Javits Center in New York City during the ceremony on the afternoon of Thursday, June 2, in front of a version of the Curtiss Jenny biplane that is pictured on the famous 1918 Jenny invert stamp.

The stamp was being presented to the American Philatelic Research Library, which is considered to be the stamp’s owner.

Also speaking at the ceremony were Keelin O’Neill, who had inherited the stamp from his grandfather; Roger Brody, president of the APRL; Preet Bharara, United States attorney general of the southern district of New York; Diego Rodriguez, assistant director in charge of the New York field office of the FBI; and Larry Lyons, executive director of the Philatelic Foundation.

Rodriquez provided the facts behind what had been a cold case for the FBI: “More than 60 years ago, a block of four of the most famous ever stamps in philatelic history, the Inverted Jenny, belonging to collector Ethel McCoy were stolen from an exhibition in Norfolk, Va. There were no witnesses, no suspects and very little evidence to pursue. The thieves were never apprehended. Over the six decades since the heist, two of the four stamps have been recovered. Thanks to the integrity of reputable dealers and collectors and investigations by the FBI.”

Ending the ceremony was the presentation of an oversized check for $50,000 to O’Neil from Donald Sundman of Mystic Stamp Co. In 2014, Mystic had offered a reward of $50,000 each for the recovery of the remaining two Inverted Jenny stamps from the McCoy block of four.

The reward from Mystic had been set to expire on Saturday, June 4, the final day of the show, according to Sundman.

He commented on the remaining stamp from the block, asking, “I wonder if the other stamp will show up by Saturday?”

But, if it does not, Sundman has extended the reward for the other stamp to the end of 2016. He said, “I am hoping that this publicity will bring the fourth stamp forward.”

Before the check presentation, English took questions from the press. One reporter asked if there was any way to trace if the recovered stamp had been stolen.

“It was a 60-some-year journey that got us here today,” English said, “and so the reality is that it is probably going to take us some time to figure out the rest of that. I am sure that the FBI is going to assist us in any way that they can.”

He added, “Stamp collectors are certainly going to know what the rest of the story is.”