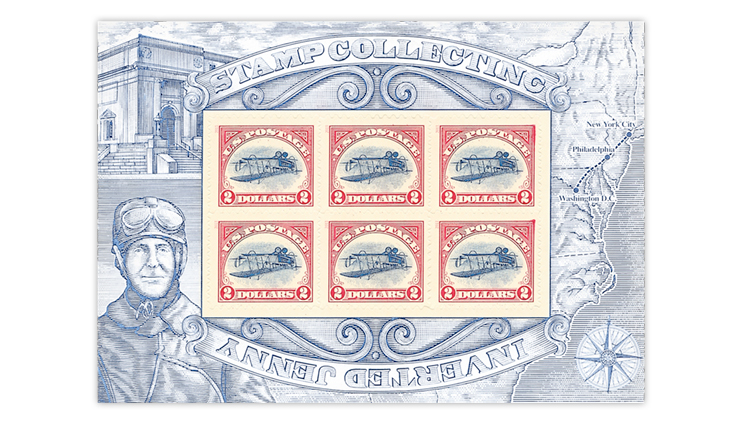 The 2013 pane of six $2 Jenny Invert stamps was taken off sale at U.S. post offices in October. All remaining panes were shipped to the U.S. Postal Service distribution center in Kansas City, Mo., and are now being sold online.

As reported in the Oct. 21 Linn’s Stamp News, a directive from Postal Service headquarters recalled all unsold stamps from the 2013 issue (Scott 4806) that were still held at the nation’s post offices.

The stamps were returned to Stamp Fulfillment Services, the centralized USPS storage and distribution center in Kansas City, Mo., and are now offered online.

The stamps can be ordered from Stamp Fulfillment Services in full panes of six for $12 each as USPS item No. 580000.

The stamps when issued were packaged in individual sealed paper envelopes and wrapped in cellophane.

Shortly after the 2013 issue date, it was revealed that 100 six-pane sheets were intentionally printed with the Jenny biplane flying right side up, unlike the normal issue that shows the plane flying upside down. Those variety panes were then somewhat randomly seeded into the stock of normal issues.

Collectors soon learned that the aftermarket value for a single rare upright Jenny Invert pane had reached $50,000 or more.

The 2020 Scott Specialized Catalogue of United States Stamps and Covers values the variety (Scott 4806d) at $70,000, with that figure in italics to denote an item that can be difficult to value accurately.

When sales of the stamps ended at post offices in October, USPS spokesman Roy Betts told Linn’s Stamp News that the stamps also would be sold at selected U.S. stamp shows while supplies last.

Endgame in sight for the 2013 United States Jenny Invert fiasco