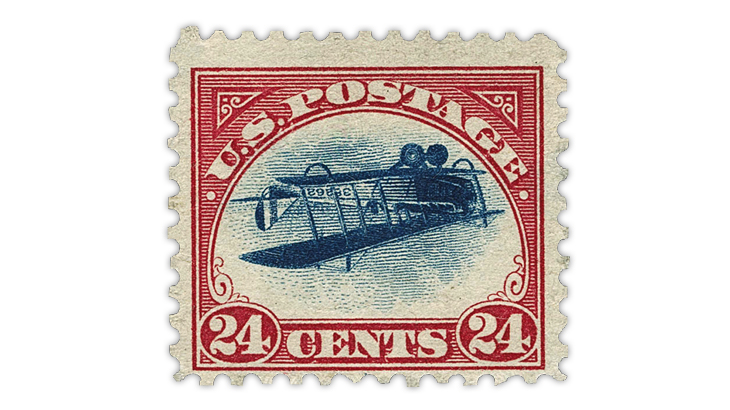 The June 26 Rarities of the World auction from Robert A. Siegel Auction Galleries consists mostly of American material this time around, but that’s not a detraction from the high quality of the stamps and postal history on offer. The rarities extend from 18th-century covers to a 2001 error just recently discovered and first reported last month in Linn’s Stamp News.

Collectors can also bid on an example of the famous Jenny Invert, the 24¢ bicolor airmail error stamp from 1918, or a Large Persian Rug, which is what collectors call the rare and colorful $500 second issue revenue stamp from 1871.

The auction features more than 35 lots of U.S. revenue stamps, along with postmasters’ provisionals, carriers, local posts and an extended range of classic U.S. regular issues.

The international component of this sale includes a used example of Canada’s 1851 imperforate 12-penny black Queen Victoria stamp (Scott 3) with large margins all around, described by Siegel as sound in every respect.

The stamp is accompanied by a 1961 Philatelic Foundation certificate signed by Louise Boyd Dale, plus a 1994 BPA certificate. The 2019 Scott Classic Specialized Catalogue of Stamps and Covers 1840-1940 values the used stamp at $135,000.

The Jenny Invert (United States Scott C3a) is the most famous error stamp among U.S. issues, with only one sheet of 100 stamps discovered with the blue “Jenny” biplane printed upside down.

The example in the upcoming auction is from position 13 on the discovery sheet, and it was privately owned for many years with its whereabouts unknown before it was auctioned by Siegel in 2007.

The stamp is described as having “slightly disturbed original gum, brilliant colors, small thin spots.” The Scott catalog value for the Jenny Invert is currently $450,000.

Another U.S. rarity included in this sale is the 1851 imperforate 1¢ blue type I Benjamin Franklin from position 7 from the right pane of plate 1 early (Scott 5), known to collectors as 7R1E.

The example in the Siegel sale leads off a strip of three stamps (positions 7, 8 and 9) struck with a red grid cancel. The two stamps to the right are both Scott 5A.

Individual lots can be viewed at www.siegelauctions.com, and a PDF version of the auction catalog is also available.