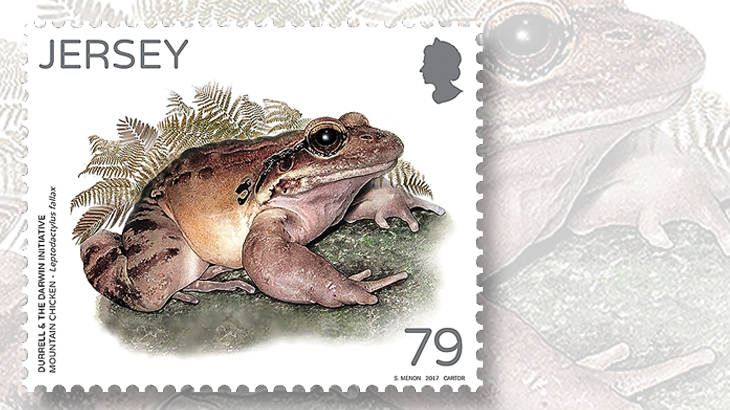 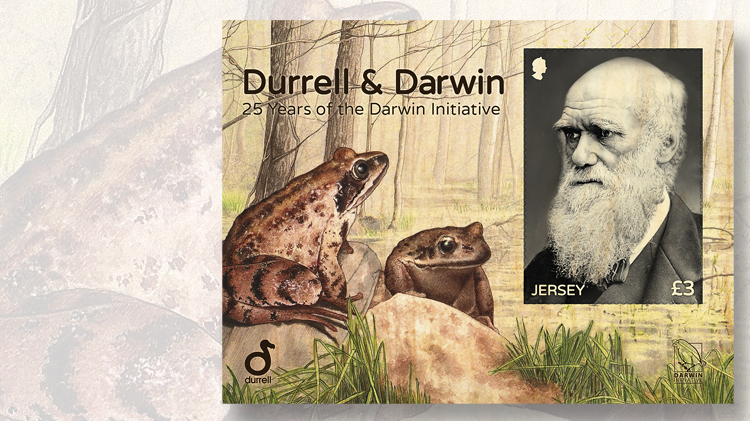 Jersey Post is honoring organizations associated with naturalists Gerald Durrell and Charles Darwin on seven stamps to be issued June 14.

One of the stamps is in a souvenir sheet made of wood, the first such item from Jersey Post.

This souvenir sheet commemorates the 25th anniversary of the Darwin Initiative, a United Kingdom government grants scheme that helps protect biodiversity and the natural environment around the world. The £3 stamp in the sheet depicts a portrait of Darwin (1809-82).

Founded in 1959 by Durrell (1925-95), the Durrell Wildlife Conservation Trust is an international charity that works to save species from extinction. It has partnered with the Darwin Initiative on several occasions.

Lee Durrell, widow of Gerald and honorary director of the charity he founded, said: “The Darwin Initiative has provided significant support to the Durrell mission for a quarter of a century, and I am delighted to see the relationship commemorated in this set of stamps produced by Jersey Post. The images depict the creatures we are helping to recover from the brink of extinction, all of which are ‘typical’ Durrell species, from a very large frog to a tiny pig — the small and less showy animals which Gerald Durrell said have just as much right to exist as the big, cuddly ones. Thanks once again to Jersey Post for bringing attention to our work in this unique way!”

While the souvenir sheet was printed on Forest Stewardship Council (FSC) certified sycamore, the other six stamps were printed on traditional gummed stamp paper in separate sheets of 10.

Among the animals featured on the stamps is a large Caribbean frog known as the mountain chicken (Leptodactylus fallax). Now found in the wild only on Dominica and Montserrat in the Caribbean, approximately 80 percent of this frog’s population was killed by the chytrid fungus in the last 12 years.

Shown in the selvage of the wooden souvenir sheet are a pair of frogs, presumably also mountain chickens.