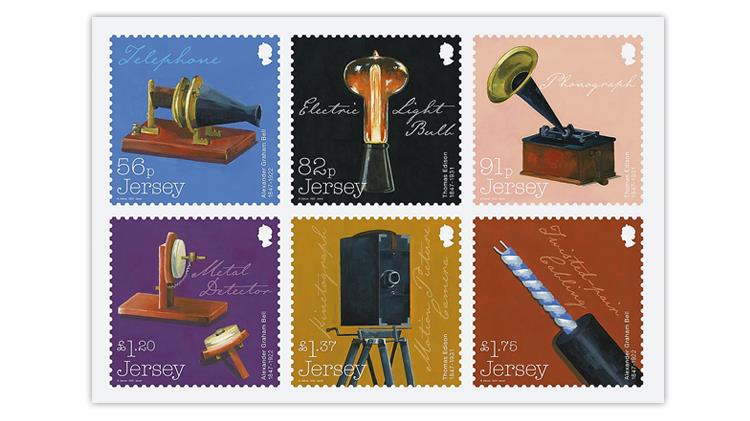 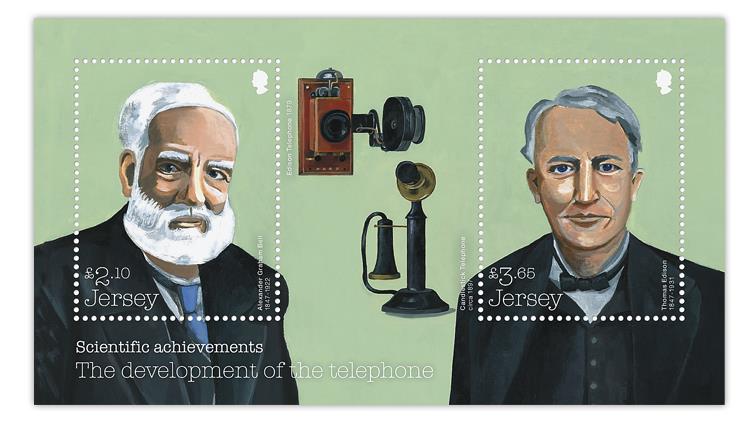 The year 2022 marks the 175th birth anniversary of both inventors and also marks 100 years since Bell’s death.

Bell, a Scottish-born American inventor, held a patent for the first practical telephone in addition to more than 17 other patents.

“Whilst Bell is credited with the invention of the first telephone,” Jersey Post said, “Edison’s work in developing a microphone that made it easier to hear what was being said, greatly improved its commercial viability.”

Edison, another American inventor, held a record 1,093 patents either singly or jointly and is best known for inventing the first practical incandescent light bulb, according to a press release from Jersey Post.

The six stamps feature illustrations of inventions by Bell and Edison against backgrounds in different colors. Also, script in the background of each stamp names the invention, and text running up the right side gives the inventor’s name and life span.

Three stamps show inventions by Bell: the telephone on the 56-penny stamp, a metal detector on the £1.20 and twisted pair cabling on the £1.75.

Edison’s inventions can be seen on the 82p, 91p and £1.37 stamps, which feature an electric light bulb; phonograph; and kinetograph, or motion picture camera, respectively.

The two stamps on the souvenir sheet present portraits of the inventors, with Bell on the £2.10 stamp and Edison on the £3.65.

Four stamps pay rates for standard letters weighing up to 100 grams: 56p for domestic letters; 82p, the United Kingdom, Isle of Man and other Channel Islands; £1.20, Europe; and £1.75, the rest of the world.

Beatrice Garcia, an artist and illustrator born in Gibraltar and based in Amsterdam, provided the illustrations for the stamp designs. Garcia said that the “contemporary palette of pastel shades for the backgrounds in the background” of the stamps give the inventions center stage in the design.

“Garcia’s joyful, bold illustrations are inspired by the colours of the Mediterranean and her work has been exhibited internationally with exhibitions in Gibraltar, Madrid and London,” Jersey Post said in a press release.

The stamps were printed by Bpost in Belgium by four-color offset lithography. Each of the six stamps depicting inventions measures 35 millimeters on all four sides, and the two stamps on the souvenir sheet are 48.75mm by 38.15mm each.