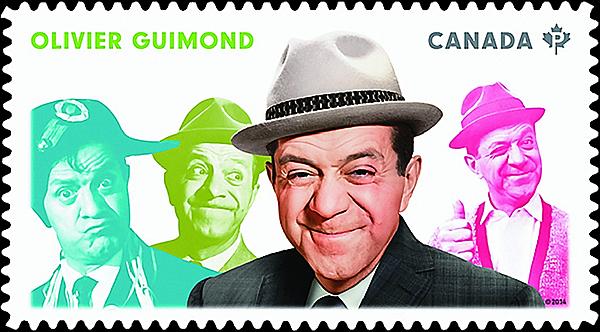 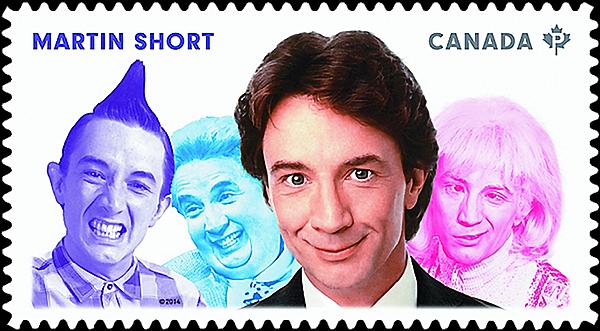 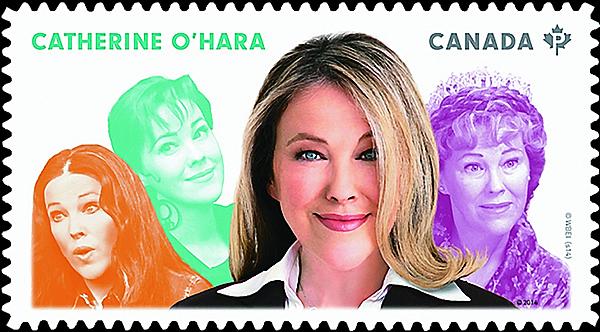 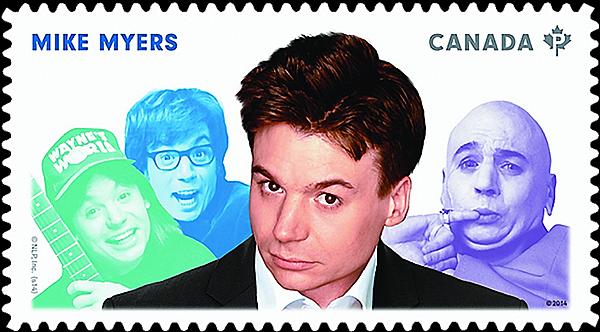 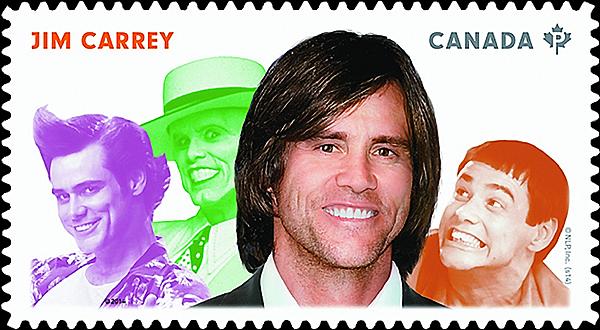 All are living honorees except for Guimond, who died in 1971.

Each stamp shows a full color photographic portrait of the featured comedian with three smaller background photographs of the same entertainer in performance.

The stamps come in a booklet of 10, with each stamp repeated twice. The booklets are being issued with five different covers.

The booklet stamps are self-adhesive, and the souvenir sheet has moisture-activated adhesive.

Jim Carrey was born Jan. 17, 1962, in Newmarket, Ontario. His success on the sketch comedy television show In Living Color led to his starring in the feature films Ace Ventura: Pet Detective, Dumb and Dumber, Liar Liar, Bruce Almighty and many others. He was inducted into Canada’s Walk of Fame in 2004.

On the stamp, from left to right, Carrey is shown in his roles as Ace Ventura, Stanley Ipkiss in The Mask, and Lloyd Christmas in Dumb and Dumber.

Mike Myers, born to British parents May 25, 1963, in Toronto, Ontario, is known for his role as a featured performer on the NBC television series Saturday Night Live, and as the star of the Wayne’s World film series, three Austin Powers movies and more, including as the voice of the title character in the Shrek animated film series.

The commemorative stamp shows Myers as Wayne Campbell from Wayne’s World, and as Austin Powers and Dr. Evil, both from the Austin Powers series.

Catherine O’Hara was born March 4, 1954, in Toronto, Ontario. She started in comedy at Toronto’s Second City, and was long associated with SCTV in many different roles. She was featured in the popular films Beetlejuice, Home Alone and others, and contributed a voice performance in The Nightmare Before Christmas.

The stamp, from left to right, shows her as Delia Deetz in Beetlejuice, as Marilyn Hack in For Your Consideration, and as Mickey Crabbe in A Mighty Wind.

Olivier Guimond was born May 21, 1914, in Montreal and debuted in Quebec burlesque at age 17. His aptitude for physical comedy and growing fame led him to television roles in Le zoo du Capitaine Bonhomme, Cre Basile and A la Branche d’Olivier. With Canadian troops deployed in Quebec during the October Crisis, Guimond starred as a Francophone soldier guarding the home of a wealthy Anglophone in a memorable sketch for the 1970 comedy review Bye-Bye.

The images on the stamp, provided by the Guimond family, include the comic’s familiar “thumbs up” signal, seen throughout Quebec in a series of commercials for Labatt 50 ale.

Each of the individual official first-day covers for the set will be postmarked in the respective comedian’s hometown.

Canada Post item numbers and additional technical details were not available as this issue of Linn’s was going to press.