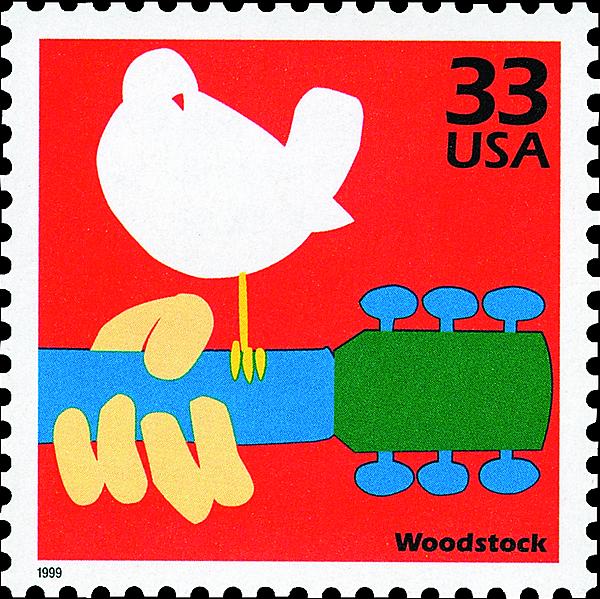 Jimi Hendrix was a headlining artist at the 1969 Woodstock festival. The 33¢ Woodstock stamp was issued in 1999 as part of the 1960s set in the Celebrate the Century series. 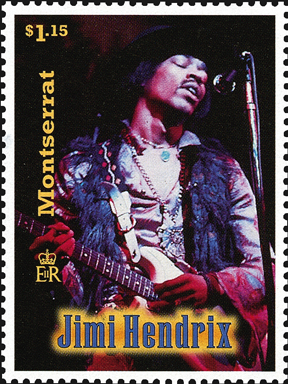 Jimi Hendrix was featured on a $1.15 stamp from Montserrat in 1997 (Scott 924). The United States Postal Service will issue a forever stamp March 13 honoring the legendary guitarist. The U.S. stamp design will be revealed on the issue date.

Hendrix (1942-70) skyrocketed to fame with his mastery of the electric guitar, transforming the world of rock music in the 1960s with his innovation and technical prowess. As lead singer, songwriter and guitarist for the Jimi Hendrix Experience, he recorded just three studio albums before his death at age 27.

Hendrix has been identified as the greatest guitarist of all time by Rolling Stone magazine. A 1992 inductee into the Rock and Roll Hall of Fame, Hendrix is described there as “arguably the greatest instrumentalist in the history of rock music.”

A concert by a “guitar super group” will be part of the first-day ceremony, according to the Postal Service. The artists scheduled to perform were not identified.

The Postal Service will reveal the stamp design March 13 and not earlier. It is assumed that the stamp pane layout will follow that of the previous Music Icons issues, presenting 16 self-adhesive square stamps in a block, with pane selvage and backing that resembles a 45rpm record.

The image used on the stamp is a painting of Hendrix by Rudy Gutierrez, who created the artwork for the 2002 album Shaman by Santana. The Hendrix stamp is his first project for the Postal Service.

Johnny Allen Hendrix was born Nov. 27, 1942, in Seattle, Wash. His parents legally changed his name to James when he was four.

After a brief stint in the Army, Hendrix began working as a guitarist in clubs, later joining backup bands supporting the Isley Brothers and Little Richard.

Moving to England in the mid 1960s, he formed the Jimi Hendrix Experience with two British musicians, bassist Noel Redding and jazz drummer Mitch Mitchell. The band recorded the hit singles Hey Joe and Purple Haze, issued the debut album Are You Experienced, and transfixed the crowds at the 1967 Monterey Pop Festival.

The Experience toured and recorded two more albums before dissolving. Having achieved worldwide fame, Hendrix headlined at the 1969 Woodstock music and art fair in Sullivan County, N.Y. He continued to tour with various musicians in the United States and Europe, but died in London Sept. 18, 1970, following an overdose of barbiturates.

First-day cancel ordering information and technical details for the Jimi Hendrix stamp were not revealed by the Postal Service as of Feb. 20.

Stamp sales are expected to take place nationwide on the day of issue.