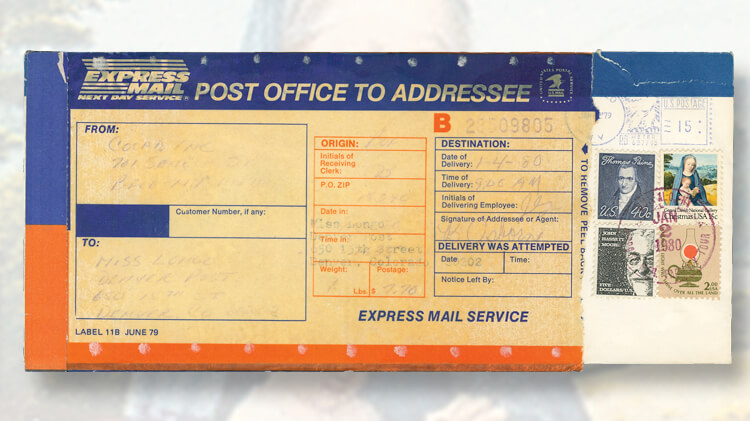 A total of $7.70 postage was required to send this Express Mail letter from Buffalo, N.Y., to Denver, Colo., on Jan. 2, 1980. Most of the postage was satisfied with a $5 John Bassett Moore stamp, the top denomination in the 1965-78 Prominent Americans ser

Are you ready for the weekend? The Linn’s editors certainly are, following a busy week of philatelic reporting. The presses, however, are coming on line to print the July 3 issue of Linn’s Stamp News that goes in the mail Monday, June 19, to subscribers. Here we serve up a few teasers of exclusive content to pique your philatelic curiosity.

How many $5 John Bassett Moore stamps did the BEP print in seven hours?

Charles Snee, in Dollar-Sign Stamps, provides the answer. He also describes the important change made at the Bureau of Engraving and Printing, a first for a United States $5 stamp, that allowed this impressive print run in a such a short period of time.

Do you have a passion for all things mathematical? Have we got a website for you

If you answered yes, then you need to head on over to Math Stamps. In this month’s Computers and Stamps column, William F. Sharpe takes Linn’s readers on a guided tour of this fascinating corner in cyberspace, a joint creation of the Portuguese Mathematical Society and the British Society for the History of Mathematics.

Is ‘Voice Stamp’ a real option? Plus a look inside a significant cover: Week’s Most Read