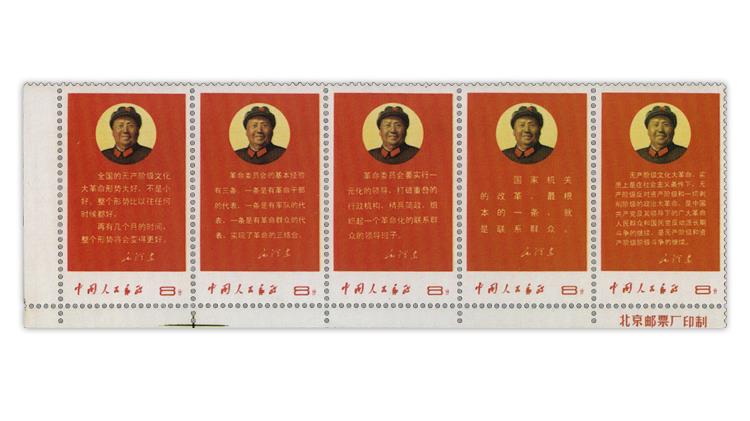 John Bull’s Aug. 15 auction of stamps and postal history of the People’s Republic of China and liberated areas features this attractive mint never-hinged strip of five of the 1968 Directives of Chairman Mao issue. 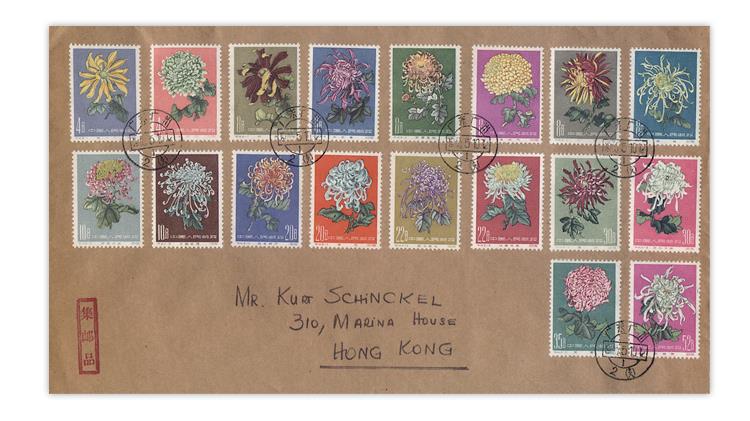 This cover mailed May 10, 1965, from Guangzhou to Hong Kong is franked with a complete set of the 1960-61 Chrysanthemums stamps from the People’s Republic of China. It is among the items up for bids in the Aug. 15 John Bull sale of the expansive collectio 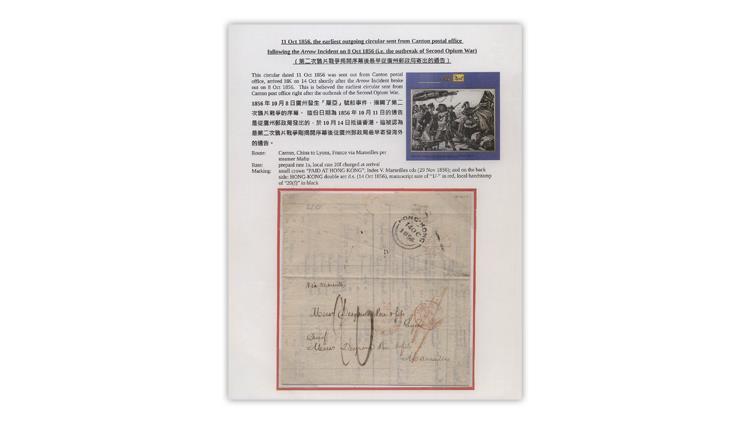 Among the key items in the Second Opium War collection being sold intact by John Bull Aug. 16 is a circular dated Oct. 11, 1856, that is described on the album page to which the circular is mounted as “the earliest outgoing circular sent from the Canton p
Previous
Next

On July 9 John Bull announced that the sale had been postponed from July 25-27 due to the COVID-19 pandemic.

The sale opens July 25 with an auction of 908 lots of Hong Kong, China and worldwide coins and banknotes; the other five auctions are philatelic and will attract collectors with a broad range of interests. Separate catalogs have been prepared for each auction.

On Aug. 15 the firm will present 1,091 lots of stamps and postal history of the People’s Republic of China and liberated areas.

Numerous scarce and important issues featuring Chairman Mao Zedong are represented in the sale, including a mint never-hinged strip of five of the 1968 Directives of Chairman Mao issue (Scott 996a).

The strip, from the bottom left imprint corner of the sheet, has one perforation fold and what John Bull describes as a “minor gum dent” on the fifth stamp.

Bull is offering the Directives of Chairman Mao strip with an opening bid of $27,000 in Hong Kong dollars (approximately US$3,484 in early July). A mint never-hinged strip is valued at $7,000 in the Scott Standard Postage Stamp Catalogue. The value is italicized to indicate an item that can be challenging for the Scott editors to value accurately.

Also being offered Aug. 15 is the expansive collection of China liberated areas and People’s Republic of China stamps and postal history.

Most of the 188 lots up for bids are covers, some of which feature colorful frankings of topical stamps. A representative example is a large cover mailed May 10, 1965, from Guangzhou to Hong Kong that is franked with a complete set of the 1960-61 Chrysanthemums stamps from the People’s Republic of China (Scott 542-559).

The 18 stamps, which show various chrysanthemums in natural colors, are affixed to the envelope in ascending denomination order in two rows of eight and one row of two. Four strikes of a Guangzhou circular datestamp neatly tie the stamps to the cover.

John Bull is presenting this eye-appealing piece of People’s Republic of China postal history with a starting bid of HK$1,500 (US$194).

Collectors seeking to begin a new collection can get a jump start by bidding in the Aug. 16 general sale, which includes 1,055 lots of stamps (including multiples, such as blocks), covers, and collections and accumulations. The auction offers strength in China, Hong Kong and the Republic of China.

One of the first items up for sale is a collection of 1878-1970s Chinese issues that the firm describes as “a thick album of Chinese mint and used stamps from Customs Post to [People’s Republic of China] issues.” Bull is offering the album with a starting bid of HK$5,000 (US$645).

A pair of specialized collections will also cross the John Bull auction block Aug. 16. The first, to be sold intact as one lot, is a marvelous array of postal history, documents and contemporaneous news accounts focused on the 1856-60 Second Opium War, which is also known as the Second Anglo-Chinese War. All of the items are still mounted on their respective album pages.

Among the key items in the collection is a circular dated Oct. 11, 1856, that is described as “the earliest outgoing circular sent from the Canton postal office following the Arrow Incident on 8 Oct 1856.”

A Chinese ship sailing under the British flag, the Arrow was captured on Oct. 8, 1856, by Chinese authorities who then detained the crew. This incident precipitated the Second Opium War.

On the synopsis page, the owner states the collection “provides eye witnessed narratives of the event happenings at the time, including various imperative battles of the Second Opium War: Battle of Canton, 3 Battles of Taku Forts, Battle of Baliqiao, together with Taiping Rebellion Battle.”

John Bull describes the collection, which is being offered with a minimum opening bid of HK$800,000 (US$103,225) as a “powerful history collection of Imperial China.”

At that time British citizens in China could use Imperial China stamps to send mail to Europe. The postmaster at the British post office in China would then apply the equivalent amount of postage in British Hong Kong stamps, which would then be canceled with the tieprint.

The tieprint showed that the postmaster had properly calculated the rate from Imperial Chinese currency to British currency.

Also included in the catalog is an appendix illustrating various customs mail matter handstamps used by 30 post offices in China.

All six catalogs can be viewed and downloaded from the John Bull website, www.jbull.com. Online bidding options are available.