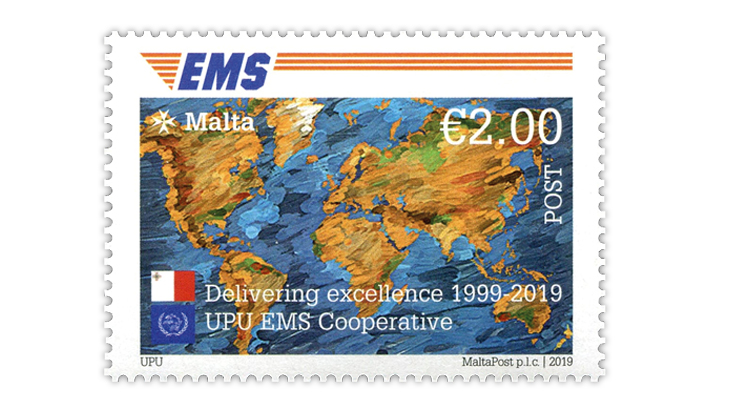 Malta is among the 20 postal administrations that participated in the Sept. 10 joint issue marking the 20th anniversary of the EMS Cooperative.

At least 20 postal administrations participated in a joint issue to celebrate the 20th anniversary of the Express Mail Service (EMS) Cooperative.

The Universal Postal Union created this cooperative to develop express delivery worldwide on Sept. 10, 1999, at its 22nd congress held in Beijing, China. The international service is now available in about 200 countries and territories worldwide.

Most of the stamps in the joint issue were issued on Sept. 10, 2019, the anniversary of the founding date, according to information from the EMS Cooperative.

All of the stamps feature the same basic design that is shown nearby on the €2 stamp issued by Malta.

This basic design includes the EMS logo at the top, a world map in the center and the UPU flag in the lower left. The flag of the postal administration that issued the stamp appears above the UPU flag.

Each stamp also includes a country inscription, the denomination and text that reads or translates to “Delivering Excellence 1999-2019” in one line with “UPU Ems Cooperative” below it. The design was created by the UPU’s International Bureau.