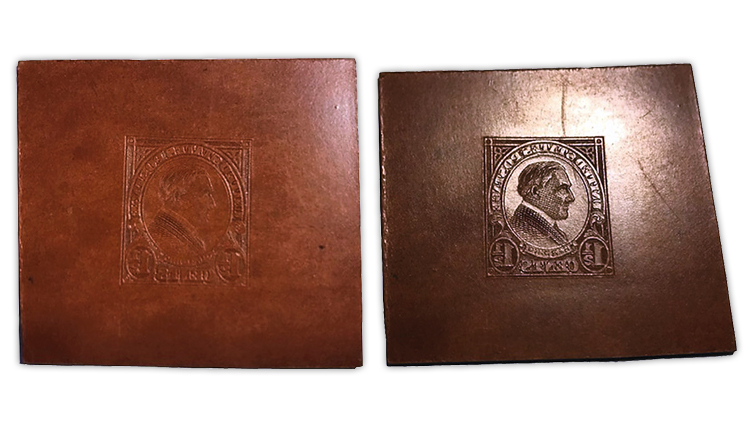 The engraved detail of the 1925 1½¢ Warren G. Harding on red pressboard shown under normal light at left and oblique light at right.

Two of the stamp hobby’s most esteemed United States philatelic researchers, Barbara R. Mueller (1925-2016) and George W. Brett (1912-2005), were both significantly intrigued over the years by the same group of unusual objects, something that most collectors have never heard of.

In the April 2020 issue of the United States Specialist, researcher Roger S. Brody revives the study of these little-known artifacts, which he has identified as U.S. red and tan pressboard transfer “proofs.”

The objects in question were described by Mueller as “small pieces of heavy brown fiberboard” with a colorless reversed impression of an engraved stamp design.

A proof is generally identified as a trial impression from a die or printing plate created prior to actual stamp production, usually to examine for defects or to see the design printed with different inks.

And while most proofs are printed on a quality paper to provide a clear impression of the printed design, these pressboard proofs are impressed in “forms of cardboard made from layers of wood fiber,” according to Brett.

The reversed image pinpoints these as proofs from transfer rolls, something noted by George B. Sloane in 1954. The transfer roll is a single design used repeatedly to impress (or transfer) an engraved image onto a printing plate.

Brody’s article is particularly notable for uncovering a study of these so-called proofs written by Brett in 1978 but apparently never published.

Brody asked Scott Tiffney, head of the American Philatelic Research Library, to find out whether Brett’s research had appeared in print, and Tiffney responded that he found no evidence of it.

Brody says that Brett’s notes and some of the pressboard proofs surfaced among stored memorabilia donated to the United States Stamp Society.

From those notes, Brody was able to compile a table of 28 designs in the form of these pressboard proofs, ranging from the 1926 2¢ White Plains stamp (Scott 629) to the 1¢ and 3¢ stamps of the 1933 Century of Progress issue (728-729), including a 3¢ essay specimen from that set with no numerals in the corner circles.

Illustrated here is an example of the 1½¢ Harding (Scott 553) impressed on red pressboard. It is shown under normal lighting at left and under oblique lighting at right to highlight the impression.

Brett’s notes point to Clyde V. de Binder, a sideographer at the Bureau of Engraving and Printing, as the creator of these objects. De Binder worked at the BEP from 1908 to 1947.

“At any rate, whether devised by Mr. de Binder as a method of checking and improving his own work or that this was simply an action performed by him as a sort of ‘lark’ we may never know,” Brett wrote in 1978.

The new 18-page article is illustrated with examples of the pressboard proofs and includes the table of Brody’s reconstruction of Brett’s details.

For more information about the United States Stamp Society, an association of collectors devoted to the study of postage and revenue stamped paper produced for use in the United States and U.S. administered areas, visit online.