July 4, more than Independence Day in the history of the United States 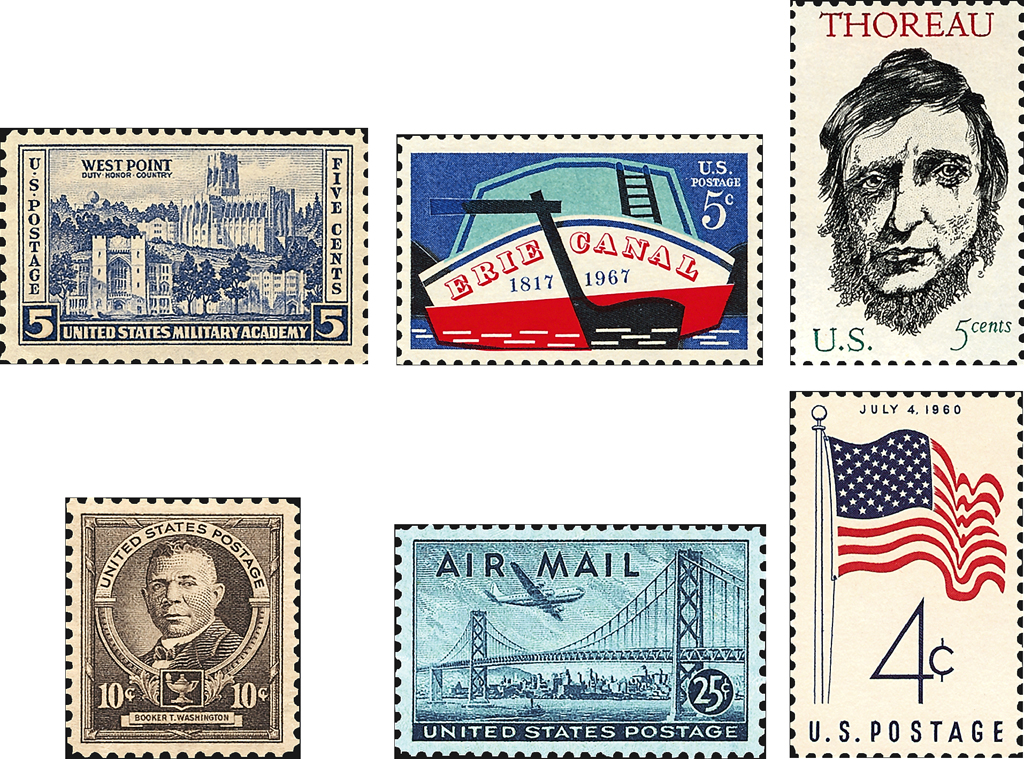 The subjects on all of these stamps are connected to events that occurred on July 4. 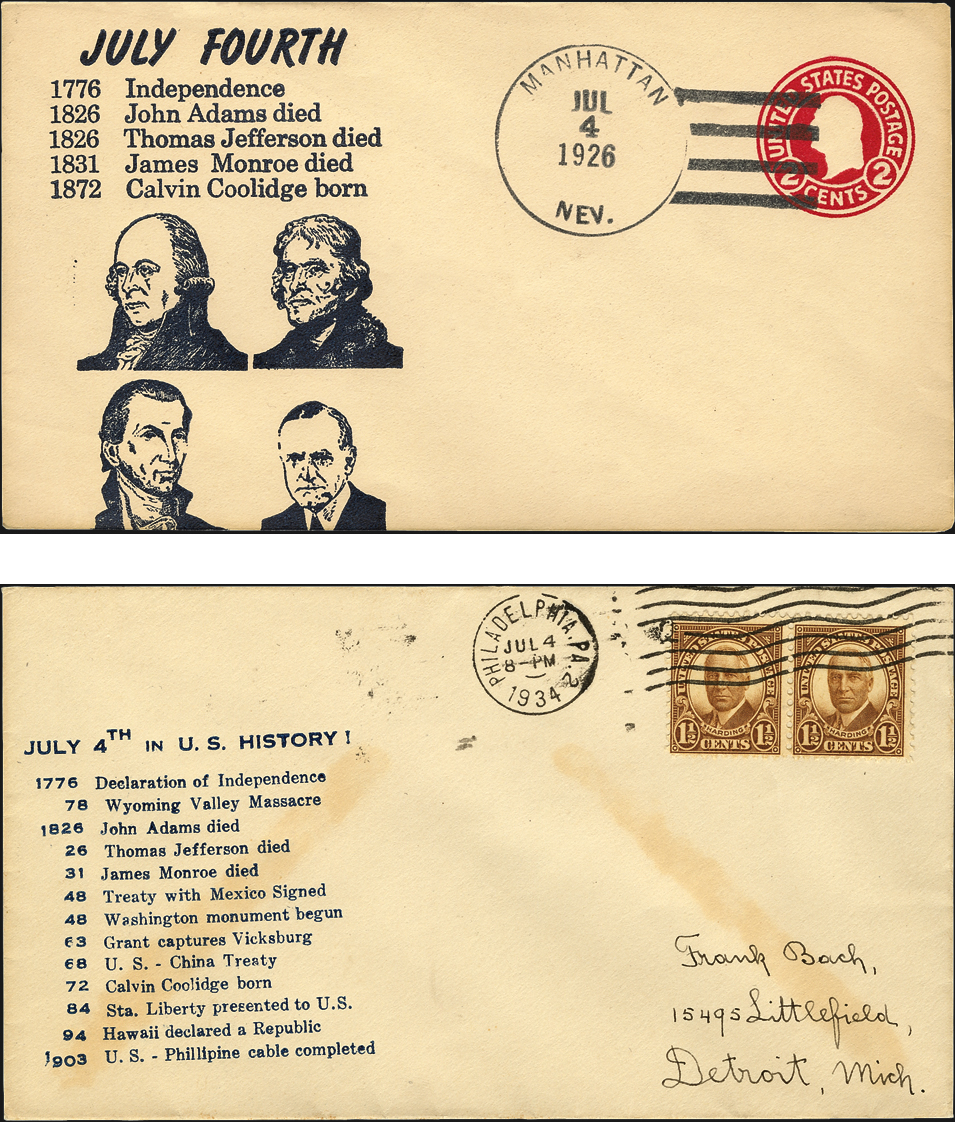 July 4th has been an occasion for commemorative covers, including these 1926 and 1934 examples listing a few events in history that occurred on that day. A more complete listing would require a much larger cover. 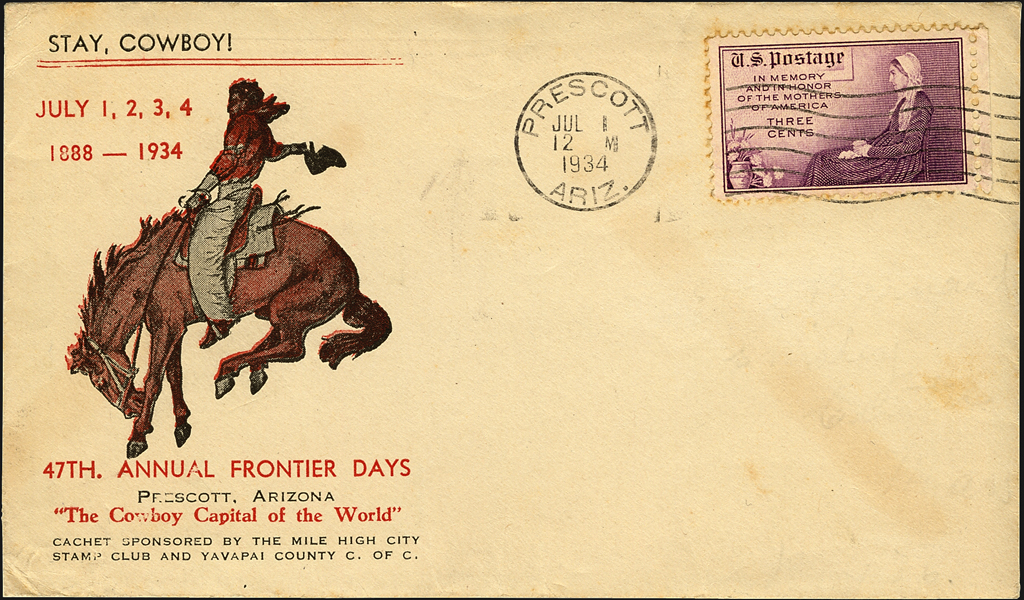 Many cities and towns around the United States have planned events around July 4 to take advantage of the festive spirit. This cover celebrates the 47th annual Frontier Days of Prescott, Ariz., held July 1-4, 1934. 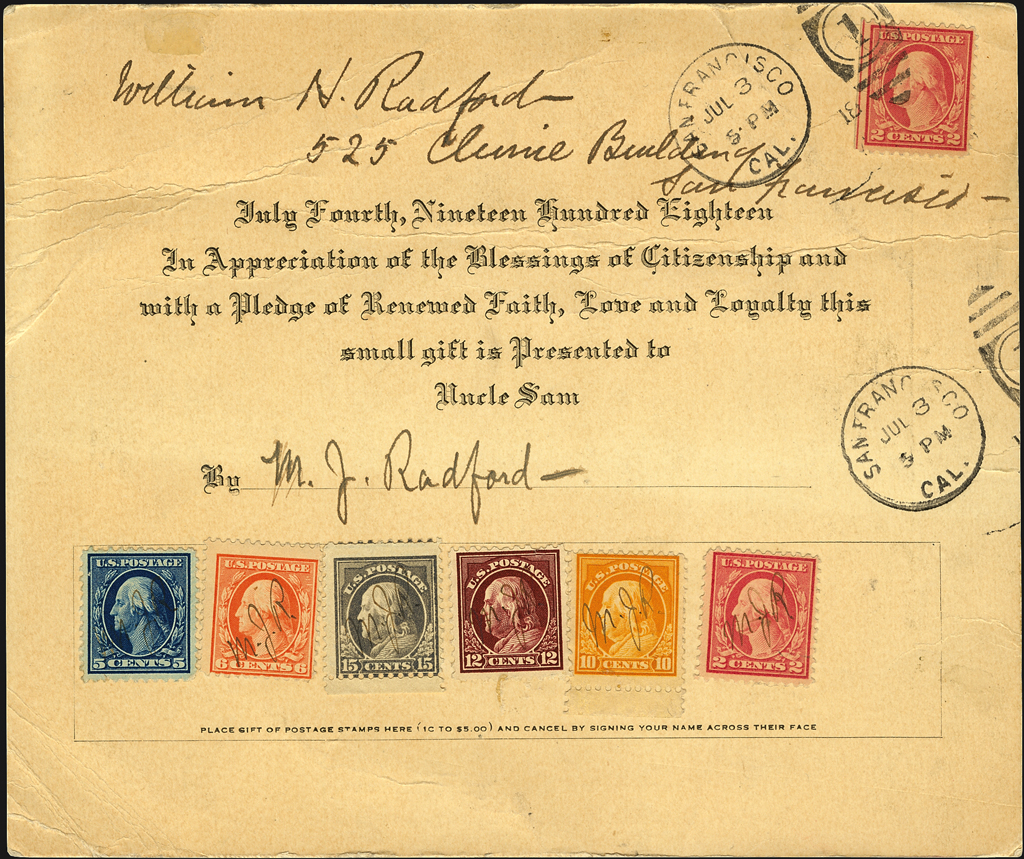 This card mailed July 3, 1918, celebrates the 142nd anniversary of the United States of America with a donation of 50¢ to Uncle Sam.
Previous
Next

In the United States, July 4 is celebrated as Independence Day in commemoration of the adopting of the Declaration of Independence on July 4, 1776.

These celebrations have taken many forms. An unusual one is the “gift” represented by the card shown nearby, probably aimed at helping to pay the costs of the United States’ involvement in World War I.

The card reads: “July Fourth, Nineteen Hundred Eighteen. In Appreciation of the Blessings of Citizenship and with a Pledge of Renewed Faith, Love and Loyalty this small gift is Presented to Uncle Sam.”

The sender purchased six stamps from the then-current definitive series with a total face value of 50¢, pasted them on the card and initialed them before sending the card through the mail to a family member.

Many cities and towns in the United States schedule summer events around the Fourth of July celebration.

A nice example is the 47th annual Frontier Days, which took place July 1-4, 1934, in Prescott, Ariz. A souvenir cover is shown.

In addition to the adoption of the Declaration of Independence, a good many other historical events worth taking note of have occurred in the United States on July 4. Two covers dated July 4, 1926 and 1934, respectively, mention a few of these events.

The 1926 cover is a 2¢ carmine Washington stamped envelope canceled in Manhattan, Nev.

It includes portraits of four U.S. presidents and mentions that two of them, John Adams and Thomas Jefferson, died on July 4, 1826. James Monroe passed away five years later, on July 4, 1831. The fourth president shown, Calvin Coolidge, was born July 4, 1872.

The 1934 cover, sent from Philadelphia, is franked with a pair of 1½¢ Harding stamps. In addition to the Declaration and the aforementioned presidential deaths and birth, the list of July 4 events inscribed on this cover includes:

1884, Statue of Liberty presented to the United States;

Since the list on the cover stops at 1903, I began to wonder: If a similar cover was created today, what might be added?

Courtesy of Google, I find that three columns of small print on a legal-size cover would be needed; not just for 1904 onward, but for earlier events left off the 1926 and 1934 covers.

1845, Henry David Thoreau moves into his shack on Walden Pond, and Texas Congress votes for annexation to the United States;

1934, Leo Szilard patents the chain-reaction design for the atomic bomb;

Many of these events can be illustrated with stamps, as shown by six examples. It might make an interesting one-frame exhibit.