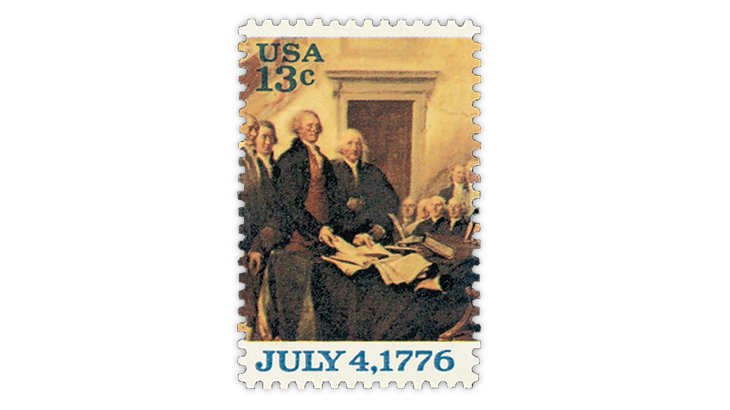 The cartoon caption contest image for July is this 13¢ stamp from the July 4, 1976, se-tenant strip of four celebrating the 200th anniversary of the Declaration of Independence. Entries must be received by July 22 for a chance to win a prize.

On July 4, 1976, the United States Postal Service issued a strip of four se-tenant (side-by-side) 13¢ stamps (Scott 1694a) commemorating the adoption of the Declaration of Independence.

The illustration shown across the four stamps is based on John Trumbull’s painting of the presenting of the draft of the document by the delegates to the Second Continental Congress, a forerunner of today’s Congress. And while our issues today are perhaps more complex, and today’s political atmosphere is if anything more divisive, the job of moving the ship of state forward remains the task of our representatives.

I have chosen the third (Scott 1693) of the four stamps for the cartoon caption contest for July, the month which we celebrate our independence.

The design of this stamp shows delegates standing and talking to each other. I ask you to put yourself in that group and comment on what they were trying to accomplish in their time, or you can transport yourself to the present and dream up one or more lines that reflect current concerns about the issues facing our representatives.

Your entries can be on the subject of politics, economics, philately, the post office, the clothing worn, the deepening divide between left and right, the state of the nation, or anything else that occurs to you.

Entries must reach me no later than July 22.