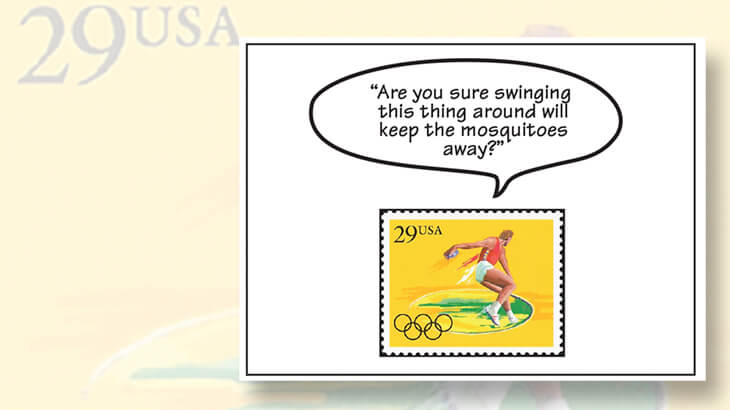 The July cartoon caption contest featured the 29¢ Discus stamp from the set of five stamps issued in 1992 to honor the 1992 Summer Olympics. Using current events as a prop, Bradley Miller wins the nonphilatelic part of the contest with this line referencing the Zika virus that has thrown a scare into those traveling to Brazil for this year’s Summer Games. The next cartoon caption contest will be announced in Linn’s Sept. 12 issue.

With politics in the wind, is it any wonder that Linn’s readers adapted the design of the 29¢ Discus stamp to that topic?

Issued July 12, 1991, to promote the 1992 Summer Olympics, this stamp was the subject of the July cartoon caption contest.

The predominant theme of the politically based entries plays off the whirling contestant. Representing this group is Ted Feldstein of Doylestown, Pa., who has the discus thrower saying, “No I’m not a spin doctor for the networks!”

Close behind in theme popularity was the use of the discus to move the mail — or even to be the mail.

Wayne Slama of Plano, Texas, has the athlete saying, “Uh-oh! I forgot the airmail stamp!”

From David Schwartz of Commack, N.Y., we have a different take, with “Boy, Amazon keeps coming up with innovative ways to deliver their orders faster!”

In the winners circle, the nonphilatelic line winner also plays off current events, specifically the Zika virus scare that has recently spread beyond the Southern Hemisphere and prompted a warning within the United States from the government. The winning line is by Bradley Miller of Huntsville, Ala.

On the philatelic side of the contest, David Cohen of Rockville, Md., takes the prize with “Before the steroids, I was only a 24¢ stamp!”

“Shouldn’t I be spinning in the other direction since Rio is below the equator?” by Norman Rushefsky of Silver Spring, Md.

“For the last time — you kids keep your frisbee out of my yard!” from Jack Leonard of Hatboro, Pa.

“Round-and-round it goes — and where it lands, no one knows!” by Gilbert Shaye of New York, N.Y.

“Ouch! I may have just slipped a disc!” from James Whiteley of Paducah, Ky.

“This is the last time I take a job as a skeet launcher!” by Steve Kotler of San Francisco, Calif.

The next cartoon caption contest will be announced in the Sept. 12 Linn’s.