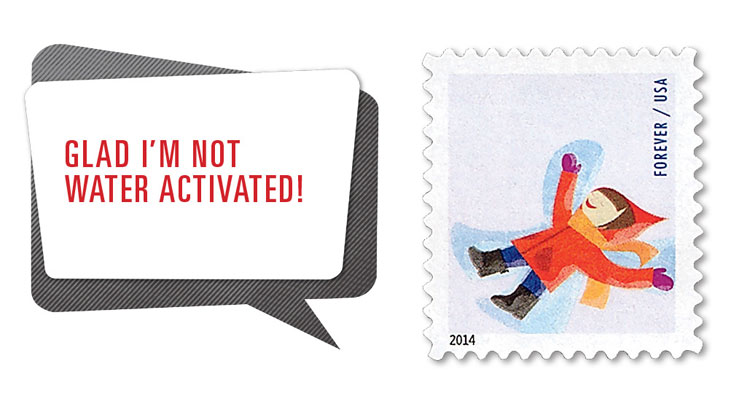 The winner of the philatelic part of the July cartoon caption is Ken Gilbert of Columbus, Ohio, who comments on the fact that this 2014 Christmas stamp showing a child making a snow angel is self-stick. The next cartoon caption contest will be announced i

Several entries thought of the figure lying in the snow as unable to get up. This one from John Himes of Cypress, Calif., suggests why: “Oh, no! I just broke through the paper and the adhesive has me stuck!”

The outstretched arms got others thinking about wings. Here’s an example sent by Dallas Barker of Flint, Mich., “I’m flying! I should be an airmail stamp.”

Another explanation for why the figure is spread-eagled in the snow was provided by David Palladino of Peabody, Mass.: “Apparently Mr. Clause didn’t check with the FAA about minimum height requirements for flying sleighs. I hope he has insurance.”

The cartoon contest winner in the philatelic category reflects on the fact that this issue is a self-stick. It is from Ken Gilbert of Columbus, Ohio.

In the nonphilatelic part of the contest, Dale Stout of Colorado Springs, Colo., takes the prize with “There’s no business like snow business.”

“This stamp is so ugly, I just passed out!” by Dave Schwartz of Commack, N.Y.

“Yippee! Grandpa promised me his 1-cent British Guiana stamp he found in a yard sale” from Reid Hinson of Kill Devil Hills, N.C.

“Well, they tell me Rudolph had a shiny red nose. My nose along with my fingers and toes are turning blue!” by Mary Lou Moseley from Owensboro, Ky.

“I’m celebrating my stamp club opening up after 16 months of lockdown!” from Kenneth Overturf of Mesa, Ariz.

“Hurry up and take the picture — I can’t feel my legs!” by Rich Wolf of Westminster, Md.

“My name is Greta Thunberg and we’ve got a problem!” contributed by Steve Kotler of San Francisco, Calif.

Thanks and a tip of the hat to all who entered. The next contest will be announced in the Sept. 13 issue of Linn’s.