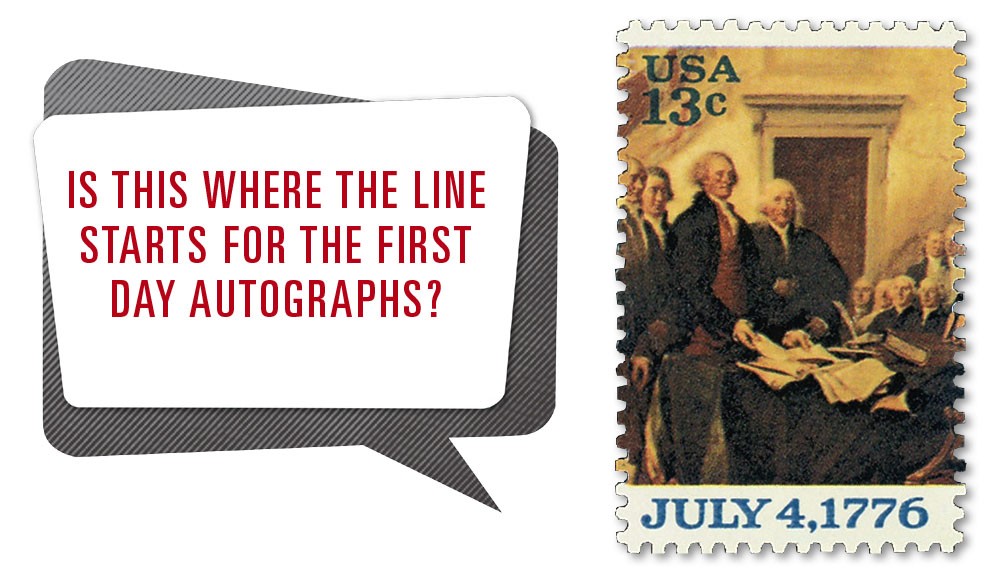 The winner of the philatelic part of the July cartoon caption contest featuring a 13¢ stamp from the July 4, 1976, se-tenant strip of four celebrating the 200th anniversary of the Declaration of Independence is Steve Patrick of Apopka, Fla., who sees an o

Almost 300 years ago, something like the scene on the cartoon caption contest stamp (U.S. Scott 1693) for July played out at the Second Continental Congress in Philadelphia, as it considered the June 28, 1776, draft of the Declaration of Independence.

Because the date “July 4, 1776” is at the bottom of the stamp’s design, it is easy to assume that the stamp pictures the adoption of the document, but that’s not the case.

Altogether, the strip of four shows 42 of the 56 signers. The reason most of those missing are not shown is that painter John Trumbull could not find likenesses of all of them when he did the painting in 1817-18.

The contest drew many entries that discussed the less weighty matters that also needed decisions. This group is represented by Woody Peele of Winterville, N.C., with “Let’s get this straight. Ben wants ham on rye; Roger — baloney, lettuce and tomato; a salad for Adams, and I’ll have a hot dog.”

The next most popular theme deals with the order of signing. Of course, Hancock as the president of Congress was accorded the honor of signing first. His famous signature drew this caption from David Vikan of Dickinson, N.D.: “Mr. Hancock! You didn’t leave enough room for the rest of us to sign!”

The content of the Declaration of Independence is well known today, but there was urgency to moving it through the process and there was probably some frustration as the debate dragged on. That provoked the line submitted by William Lunceford of Sandy, Ore., who speaks for other entrants with “Come on guys, just sign it. We can see what’s in it later!”

The winner of the best philatelic line, shown in the box on this page, is Steve Patrick of Apopka, Fla., who is thinking about the ceremonials rather than the substance.

On the nonphilatelic side of the contest, the winner is David Cohen of Rockville, Md., who suggests, “OK, who leaked the text to Politico?” (Politico is a news operation and information service that specializes in politics and policy.)

“We’re agreed, then. Mr. Franklin here will be the first person pictured on a U.S. postage stamp,” by Harold Forbes of Castleton, Vt.

“With all the political unrest these days, it’s enough to make you flip your wig!” from Steve Kotler of San Francisco, Calif.

“Old Ben Franklin says that one day our new country will be printing up stickers to pay postage on our letters. That’ll never happen!” sent by Gordon Trumbull Trotter of Sarasota, Fla.

“We declare ‘BREXIT’!” by Steven Harvey of Red Lion, Pa.

“The pursuit of happiness? I’ll drink to that!” from Dave Schwartz of Commack, N.Y.

“If you just scanned all these papers into your computer, your desk wouldn’t look so messy!” by Bob Conicelli of Yonkers, N.Y.

“OK, who used the white-out?” sent by Tim Tango of Westhampton Beach, N.Y.

Thanks and a tip of the hat to all who entered. The next contest will be announced in the Sept. 12 issue of Linn’s.