A wide range of stamps and covers in the Feldman auction representing stamps of Great Britain used overseas includes this 1862 cover from Mauritius to Ireland. 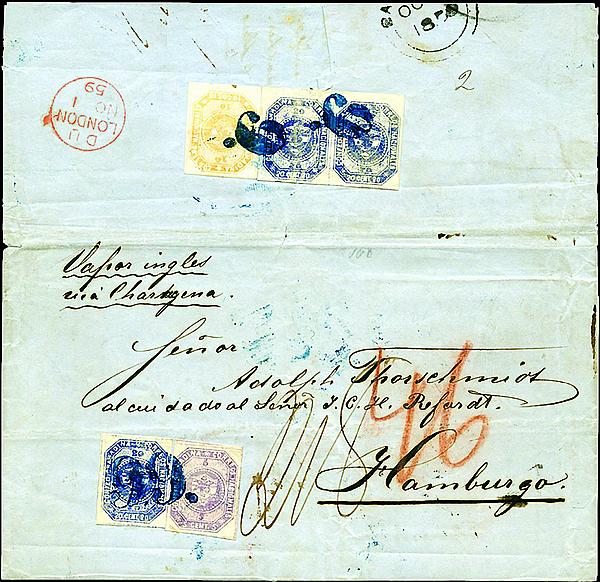 An 1859 folded letter mailed from Bogota to Hamburg, franked with multiple stamps from Colombia’s first issue, is offered in David Feldman’s Rarities of the World sale during the Geneva firm’s Dec. 1-6 autumn auction series.

Each day of the auction will offer material carefully organized in specific categories.

Monday, Dec. 1, begins the series with more than 760 lots of Israel, including the Belinkoff collection and the Weissenberg Holocaust collection.

Tuesday brings to auction the Russian post office in the Chinese empire and Russia’s war in China, including material from the Boxer rebellion (beginning in 1898), the Russo-Japanese war and more.

Great Britain and British Commonwealth are featured on Wednesday, general overseas and rarities are offered Thursday, and collections and Europe are offered Friday and Saturday.

Also featured among the rarities is an 1859 folded letter mailed from Bogota, Colombia, to Hamburg, Germany, franked with multiple stamps of Colombia’s first issue.

Franking on the front of the letter consists of the 5-centavo and 20c stamps tied together with two bold strikes of a large “9.” handstamp. The back of the cover adds another pair of the 20c alongside the 10c, again struck with the “9.” postmark.

The letter, written in English, was from an English merchant and sent via the English mail, traveling via steamboats of the Royal Mail Steamship Co. from Cartagena to St. Thomas to Southampton, attracting a British post office Cartagena backstamp and a Hungarian Prussian mail marking along the way.

The Great Britain material presented includes classics and postal history, plus a fascinating selection from the Pearmund collection of Great Britain used abroad. British stamps and covers struck with identifiable postmarks from post offices worldwide are offered from locations as diverse as Puerto Rico, Morocco and Crimea.

This section of the sale offers one of the only two covers from Mauritius that are known franked with stamps of Great Britain.

The envelope was mailed to Ireland June 9, 1862, franked with the 1856 6-penny lilac stamp, a lovely “right wing marginal” example of the stamp struck with a clear “B53” numeral handstamp and a neat Dublin circular date­stamp.

Formerly part of the “Emerald” collection, the cover is certified with expertization from BPA in 2003 and offered with an estimate of E5,000 ($6,200).

Auction bids can be placed online, and additional information about the Feldman auction series is available from the firm’s website at www.davidfeldman.com; or contact David Feldman S.A., 175 Route de Chancy, 1213 Onex, Geneva, Switzerland.