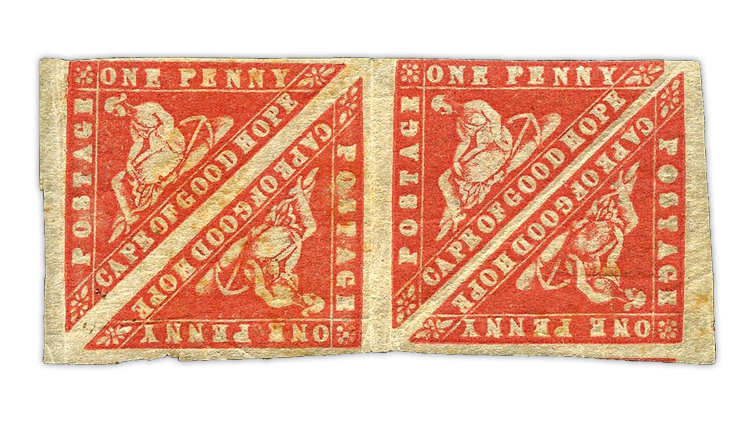 The upcoming David Feldman spring worldwide auction series will include the unique unused block of four of the Cape of Good Hope 1-penny vermilion Woodblock, formerly in the collections of Dale-Lichtenstein and Ad Indusophon.

Among the many rarities on offer is an important classic uniquity of Cape of Good Hope.

The auction series takes place June 14-19 at the firm’s facility in Geneva. While in-person attendance is expected, Feldman requires those wishing to attend to call for information at least five days in advance of the sale to ensure social distancing can be maintained.

Online bidding is an option using the Feldman website or through Stamp Auction Network.

The auction series begins Monday with part 4 of the J. Chalhoub collection of Egypt.

It continues Tuesday with Russia, Soviet Union and zemstvos; Wednesday with China and Japan, and France and colonies; and Thursday with Europe and other worldwide material, collections and Latin America.

Friday’s auctions focus on Great Britain and the British Empire. Saturday will offer Egypt and Persia.

The auctions will be conducted in euros with the exception of the Friday Great Britain and British Commonwealth sales, during which bids will be placed in pounds sterling.

The British Commonwealth material includes a unique rarity from Cape of Good Hope: the 1861 1-penny vermilion triangular Woodblock stamp in a mint block of four “with virtually full original gum.”

Feldman notes that one side of the block is just cut into and that it has some creases and minor toning.

The block is ex-Dale-Lichtenstein and Ad Indusophon and accompanied by a British Philatelic Association expertizing certificate from 2007.

The 10 auction catalogs in this series are filled with stamps and postal history, essays and proofs, large lots and collections, and a broad array of material from far and wide.

All of the catalogs can be viewed on the Feldman site, or contact David Feldman International Auctioneers, Route de Chancy 59, Building D, Third Floor, 1213 Petit-Lancy, Geneva, Switzerland, for additional information.