What would FDR think of social media? Enlighten us in June contest 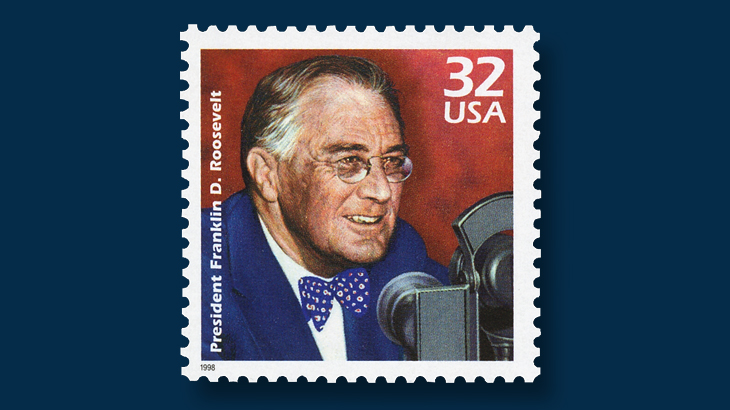 The cartoon caption contest stamp for June is the 1998 32¢ Celebrate the Century stamp showing President Franklin D. Roosevelt at a radio microphone presenting one of his fireside chats. What do you think he might be thinking or saying about philately, th

Radio was the social media of Franklin Roosevelt’s time, and he understood its power. Eight days after taking office, he went directly to the American people in a way no prior U.S. president had done with the first of his series of fireside chats.

Revolutionary for its time, the practice has echoes today in Barack Obama’s use of several social media platforms during his campaigns for the presidency and after he was elected, and Donald Trump’s use of Twitter.

One can argue the merits of social media, but as President Roosevelt understood, it cut out the middleman (the press) between himself and the electorate. No longer was the public dependent upon the press for the president’s thoughts on issues of the day.

Roosevelt could go directly to the citizenry, and he relished the opportunity.

A 32¢ stamp picturing President Roosevelt at the microphone engaged in a chat will be the cartoon caption contest stamp for June.

Put yourself in the moment as Roosevelt a serious lifelong stamp collector in addition to his presidential duties, addresses American citizens. Tell me what you think he might be saying about philately, the issues of his time, or (as one of its pioneers) the development of social media.

To be considered for the prizes, entries must reach me no later than June 22.

Get creative and caption this 1989 $2.40 Raising of the Flag on the Lunar Surface stamp