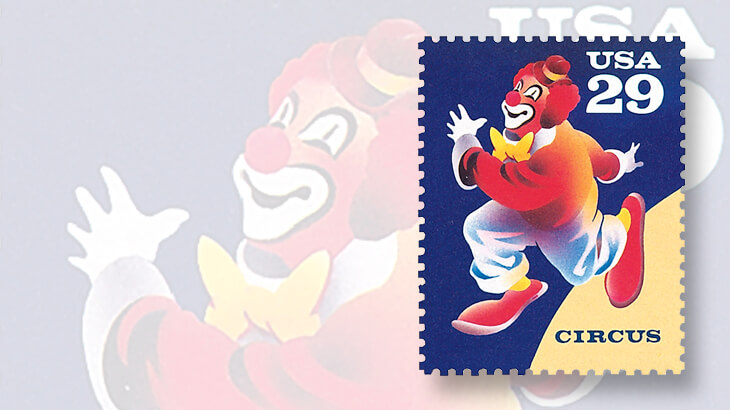 The cartoon caption contest stamp for June is the 1993 29¢ stamp showing a clown from the Circus block of four. Put yourself in the clown costume, review the news of the day, and either laugh or cry your way to an entry that comments on what is going on.

With many things going on in the United States, including the reduction in the domestic postage rate and the current political scene, and in the world, such as the failure of several straight North Korean rocket tests, the 29¢ Clown stamp (Scott 2750) from the 1993 Circus block of four seems like an appropriate subject for the June cartoon caption contest.

This was the second U.S. issue to honor the American Circus industry. The first was a 1966 5¢ stamp marking the 100th birth anniversary of John Ringling (Scott 1309). That stamp shows a smiling clown, widely believed to have been modeled on the clown “look” of Lou Jacobs.

Clowns can be happy or sad, funny or droll, snappy or baggy. So, given the gravity of many of the issues in today’s headlines, you are not limited to hilarious lines as entries.

To enter this month’s cartoon caption contest, put on the makeup, wig and fancy costume and consider what you might be thinking or saying about the passing scene, the stamp, philately or anything else that trips your fancy.

To be considered for the prizes, entries must reach me no later than June 24.