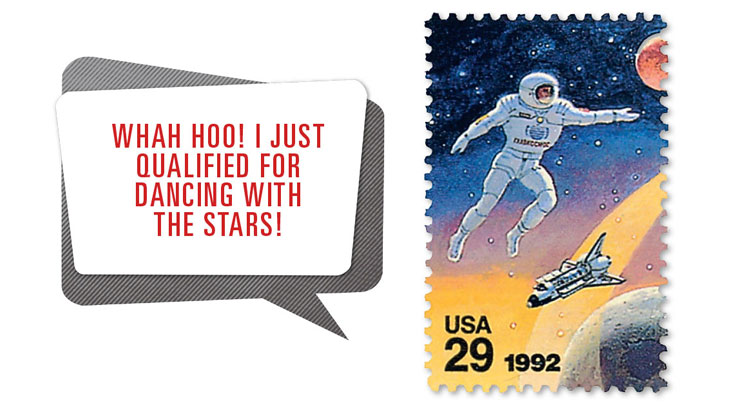 The winner of the nonphilatelic part of the June cartoon caption contest featuring the United States 1992 29¢ Space Accomplishments stamp showing a Russian cosmonaut and a U.S. space shuttle is Gilbert Schaye of New York City, who sees the pose of the cos

The Russian invasion of Ukraine was, of course, the focus of many entries in the June cartoon caption contest featuring a 29¢ stamp showing a cosmonaut and space shuttle (Scott 2631) from the 1992 United States-Russian Space Accomplishments block of four (2634a).

Dave Schwartz of Commack, N.Y., represents this group with “Listen Houston, any chance I could stay up here for a while longer until we stop this lunacy in Ukraine?”

Other entries noticed that the cosmonaut is shown floating outside the space shuttle with no oxygen lifeline. Richard Wolf of Baltimore, Md., captures the situation with the cosmonaut saying, “What the sputnick! Where’s my tether?”

COVID-19 rears its ugly head in another group of entries, represented by “I think those guys are taking social distancing a bit too far” from Steve Schwartz of Jersey City, N.J.

The winner of the best nonphilatelic line, shown here, is Gilbert Schaye of New York City, who gives “stars” a different meaning than is standard for the reality TV program.

On the philatelic side of the contest, the winner is Wesley Heacock of Port Angeles, Wash., whose line is “Mail to Russia embargoed? What about my commemorative covers?”

“So this is what happens when you ‘put in’ your opinion of Putin,” by Steve Kotler of San Francisco, Calif.

“Vladimir always said he ruled everything he could see. Failure in Ukraine might get him a permanent view from my vantage point!” sent by Michael Schwartz of Montgomery Village, Md.

“This sight leaves me breathless, but there’s no air anyway” from Mary Lou Moseley of Owensboro, Ky.

All I wanted was to go to Disneyland!” from Clyde Blanke of Matteson, Ill.

“That’s the last time we let him order beans for dinner!” sent by Douglas Schwartz of Tampa, Fla.

Thanks and a tip of the hat to all who entered. The next contest will be announced in the Aug. 8 issue of Linn’s.