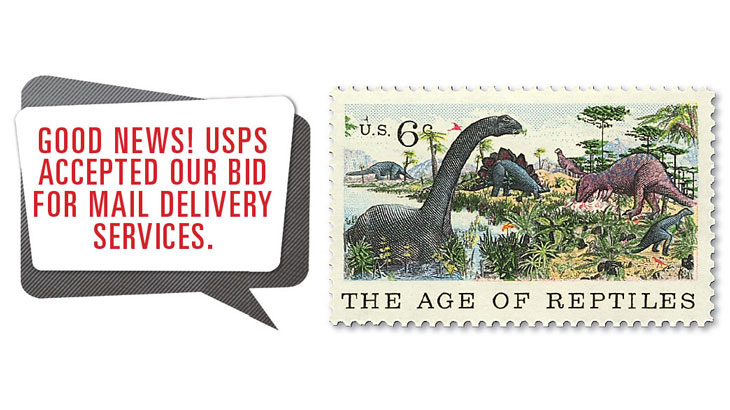 The winner of the philatelic part of the June cartoon caption featuring the 6¢ Age of Reptiles stamp from the 1970 Natural History block of four is Harold Forbes of Castleton, Vt., who takes jab at increasing United States Postal Service delivery times. T

One of the prevailing theories about the extinction of the dinosaurs is that a comet, asteroid or meteor slammed into Earth causing cataclysmic devastation that wiped out most life on the planet.

Several entries in the June cartoon caption contest featuring the 1970 6¢ Age of Reptiles stamp (Scott 1390) referred to such an event.

Jack Leonard of Hatboro, Pa., weighed in with “Meteor? What’s a meteor?”

Mildred Barylski, a paleontologist by trade, thought the brontosaurus had a better understanding: “What’s that in the sky? A bird? A pterosaur? Uh-oh, it’s a meteor!”

Another popular theme is represented by this entry from Dave Schwartz of Commack, N.Y., “Hey, what time are the Flintstones on tonight?”

Mary Lou Moseley of Owensboro, Ky., was one of the cartoon entrants who took note of the 6¢ face value and thought it was insufficient recognition of the importance of dinosaurs. The USPS must have agreed because in 1989 it issued the block of four 25¢ Prehistoric Animals stamps (Scott 2422-2425).

Harold Forbes of Castleton, Vt., takes the prize for the best philatelic caption.

In the winning nonphilatelic caption, Gordon Gouveia of Merrillville, Ind., submitted, “Hey guys! I think we all need to think about a weight loss plan for the New Year!”

From Stanley Alexander of Waltham, Mass., “6¢ postage is not the only thing to become extinct! Nothing is forever; not even stamps.”

“Hey Allosaurus, Guess what day it is? It’s Hump Day,” from Fred Breier of Oradell, N.J.

“Plants … Plants … Plants! I’m sick of plants. When do I get to eat some meat like the allosaurus over there?” by Mitchell Zais of Columbia, S.C.

“OMG, Is that Steven Spielberg!?” sent by Rich Wolf of Westminster, Md.

“I just got a letter sent to me during the Triassic Period!” from Nicholas D’Amico of Kingman, Ariz.

“I don’t feel so good. It must have been someone I ate,” by Steve Kotler of San Francisco, Calif.

Thanks and a tip of the hat to all who entered. The next contest will be announced in the Aug. 9 issue of Linn’s.