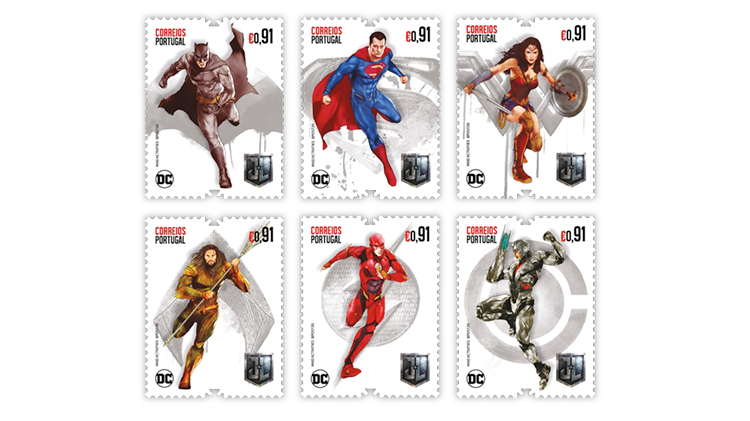 The six big names from the 2017 Justice League motion picture are shown in action on this Aug. 24 issue from Portugal’s CTT. The stamp set also includes a souvenir sheet with a single stamp depicting all six of these superheroes.

There are six stamp designs, depicting each of the main characters from the 2017 film Justice League: Batman, Superman, Wonder Woman, Aquaman, The Flash and Cyborg.

The movie has been out for only three years, but the characters have been around for decades. Justice League is a roster of fictional superheroes gracing the pages of comic books written by Gardner Fox and published by DC Comics.

New heroes have been added throughout the years, but the first Justice League of America group was made up of Superman, Batman, Wonder Woman, The Flash, Green Lantern, Aquaman and Martian Manhunter in The Brave and the Bold No. 28 (March 1960).

According to DCcomics.com, “The decade of the 60s opened with a roar, as the biggest superheroes in DC Comics came together for the first time as the Justice League of America.”

In The Brave and The Bold, Superman, Batman and Wonder Woman teamed up with the Flash, Green Lantern, Aquaman and the Martian Manhunter to face Starro the Conqueror, who would be a foe for decades. After appearing in two more comics, the league gained its own title, which ran for 26 years.

The aforementioned 2017 film was the first live-action movie featuring the Justice League produced by Warner Bros. Pictures. In the film, Batman (portrayed by Ben Affleck) and Wonder Woman (Gal Gadot) recruit The Flash (Ezra Miller), Aquaman (Jason Momoa) and Cyborg (Ray Fisher) after Superman’s (Henry Cavill) death to save the world from Steppenwolf and his army of Parademons.

MAD Activities designed the six €0.91 stamps. The stamp printing office of Belgium’s bpost printed the stamps by offset, producing 130,000 examples of each stamp.

In addition to the stamps, a souvenir sheet with a €2 stamp showing all six of the superheroes was issued in a quantity of 50,000. Other related products include two first-day covers, one with the six €0.91 stamps, and the other with the souvenir sheet.