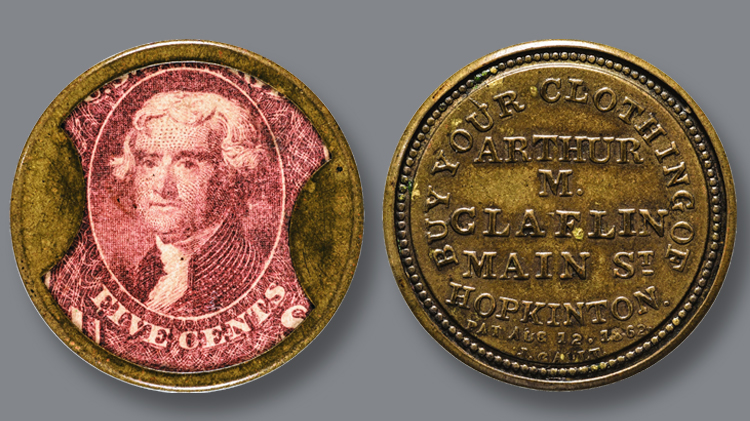 The March 8-10 Kagin's auction at the National Money Show includes a broad selection of encased postage stamps, including this 5¢ Civil War-era rarity for Arthur M. Claflin.

The auction is taking place May 8-10, with the encased postage stamps all offered during the auction’s second session on Friday, March 9.

The Michigan Collection of encased postage stamps “is believed to be one of the most comprehensive sets ever and perhaps currently the finest and most complete including 145 different varieties,” according to the auction firm.

Some are extremely rare, but even some of the rarest examples are being offered in the Kagin’s auction.

The example in the Kagin’s auction is described as “choice extremely fine.”

Kagin’s reports it has confirmed only two known examples of the 5¢ Claflin. It describes this one as having an attractive golden brown color of the case and frame, with strong definition of the wording.

“The mica is largely free from distractions while just some light wrinkling of the otherwise bold stamp.”

Kagin’s reports this piece sold in 2012 for $15,275. The Scott catalog shows a value of $15,000 for the 5¢ Claflin, with the amount listed in italics to identify an item that can be difficult to value accurately.

The 1862 patent for a “Design for Encasing Government Stamps” was issued to John Gault, who also used his own innovative design to create encased postage that solicited advertising partners.

One variety of this is the Kirkpatrick and Gault encased postage (Scott EP113-EP120). The Kagin’s sale includes several varieties of this issue, with a 90¢ example described by Kagin’s as “likely the finest known.” The piece sold for $9,200 in 2012, and is listed in the Scott U.S. Specialized catalog at $10,000. The opening bid in the auction is $2,900.

The Michigan collection “represents many of the finest single specimens that could be obtained for each denomination and from every merchant,” Kagin’s notes.

The auction can be viewed on the Kagin's website, with online bidding options available.