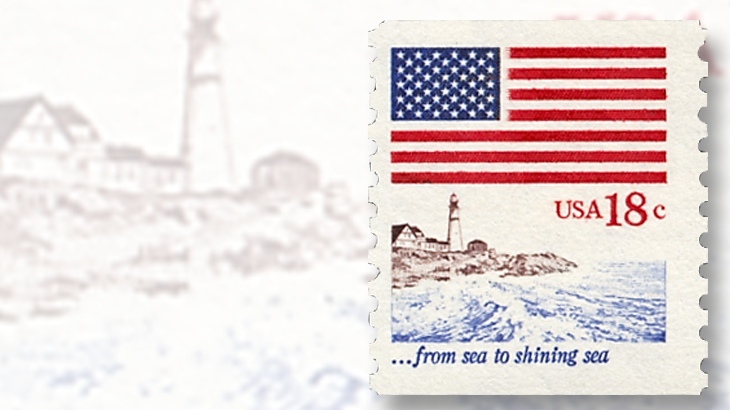 The 18¢ From Sea to Shining Sea Flag coil from 1981. The lyrics to America the Beautiful were written by Katharine Lee Bates.

Elements of the song America the Beautiful have been featured on various United States stamps, perhaps most notably on three 18¢ definitive stamps issued in panes, coils and booklets on April 24, 1981.

Each stamp is inscribed with a phrase from the patriotic tune, and shows a scene representative of that line. The stamp from the pane of 100 (Scott 1890) reads, “…for amber waves of grain” and shows grain being harvested. The coil stamp (1891) states “…from sea to shining sea" and shows a shoreline and lighthouse. The booklet stamp (1893) features a view of purple mountains, and the words “…for purple mountain majesties.”

Bates, a college professor, wrote a number of poems during her lifetime and contributed regularly to publications including The Atlantic Monthly and Christian Century. She died at age 69 on March 28, 1929.